It’s the fourth weekend of May, it’s been glorious weather and yet they’re still skiing in Scotland. It’s been one hell of a year up there. 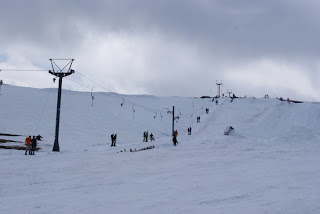 At training, MD’s running and hurdling style gets criticized. He’s dragging his back legs. He could just be lazy, which I’d say is favourite and this can be trained out of him or he may have a hip problem which would make him unsuitable for agility unless it can be treated with doggie massage. He’d hate that, he’s a bit touchy about being touched sometimes, though I suppose if the masseur was a nice blonde he might go for it.

Someone at the club has a video of him and she lends it me to study. In fact she lends me the whole camera as not being technically savvy, I won't throw in any sexist jokes here, she doesn’t know how to get the video off the camera and on to her computer to email it to me.

As it happens my Dad also took some videos at the weekend, so I spend the evening studying all of them. Inconclusive I think.
Posted by FitForNothing at 4:00 PM