Can't See The Band For The Trees

I wonder about taking my number one bike into work but in the end after fiddling with number two bike, oiling things, tightening things, shaking things, it doesn’t seem to rattle as much so I give it a go. People aren’t stopping and staring this time. Well, not as much. It's actually warm enough to enjoy the ride, even though my legs are very tired. No idea why, I’ve done very little this week so far.

I must be enjoying it because I’m under 49 minutes for the ride home, not done that for ages and on a squeaky bike as well.

Tonight we’re at the YMCA! Well Leicester’s Y Theatre, a totally new venue to me and quite an impressive one too. Though I dillydallied on getting tickets for this one and the standing tickets sold out, so we ended up with seats on the balcony of what turns out to be quite a lovely little theatre, very intimate and with great acoustics. Looking on the bright side, with being on the balcony we should get a good view of British Sea Power’s guitarist, Noble, when he goes on his usual climbing spree.

Support tonight is from John & Jehn or should that be Nicolas and Camille as those are their real names. The couple, and they are apparently a couple, are from France although they do have or at least had a London base and they sing totally in English. They’re another of the current crop of bands with an experimental edge and claim to have recorded most of their debut album in their bedroom.

In the last year or so they have expanded to be a quartet and follow another trend of late, which is proving their musicianship by getting everyone in the band to trade instruments at various times during the set. They appear to have expanded their sound too, embracing more of a pop side and less of the experimental. Still means they can throw in a few animalistic yelps occasionally. Pleasant, promising but not spectacular. 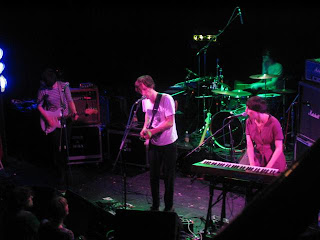 So to one of the most eccentric bands around. The eccentricity starts as ever before the band even comes on stage with the setting up of the equipment, which is again adorned with numerous flags in a nod to their ‘Waving Flags’ track and far more foliage than I’ve seen for a while. In fact the strategic placement of so many sprigs of plant life probably delays their entry by a good ten minutes or so. Then when they take to the stage you can only just see the band for the trees.

Opening with an oddity, ‘Apologies to Insect Life’ from their debut album, ‘The Decline Of British Sea Power’ they are soon up to speed with the wonderful ‘Atom’, which concludes as usual with the use of the air raid siren. Although their singer Yan, in some sort of woollen cricket jumper thing, he must be really hot, and with a hunting horn across his back, claims to feel a little out of sorts. Something is missing as regards his guitar he reckons. A plectrum perhaps someone kindly ventures from the crowd. Yan is as ever the most absurdly dressed of the band but the rest always run him close, all looking as they come fresh from the nearest charity shop. 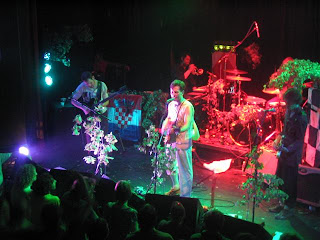 ‘Atom’ is taken from their most recent album, 2008’s excellent ‘Do You Like Rock Music’, which forms the bulk of the set, seven tracks tonight, with a few old favourites thrown in.

Yan hands over vocals to his brother Neil for a couple of tracks, which also happens to be some of their best recent stuff, ‘Down on the Ground’ and ‘No Lucifer’. Both are standout moments. 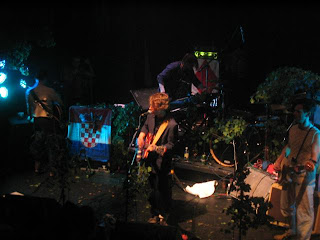 Then there’s the usual brilliance of oldies of ‘Remember Me’, the superb short burst that is ‘Favours In The Beetroot Fields’ and ‘Please Stand Up’, the only track from ‘Open Season’ tonight, played back to back.

It’s a laid back and relaxed performance from the band but then the Y Theatre is a very relaxed sort of place. The crowd is chilled too, no crush down the front and certainly no beer throwing. The band themselves are not quite so way out this evening, concentrating on the music. Again we have the violinist, Abi, on stage and playing throughout, although again we can barely hear her, drowned out by the rest of the band. This is despite the sound quality being excellent tonight, crystal clear in fact. As I’ve said, excellent little venue. Suppose Abi serves the purpose of being nice to look at but I can’t see her from my position ‘up on the shelf’. 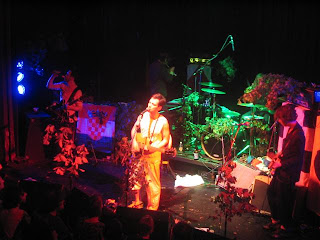 There are three new songs, the last of which is dedicated to someone who’s been to 250 gigs... although the band seem to think only they qualify for this. All of new songs sounded impressive and went down well.

We know the end is nigh when their first single ‘Fear of Drowning’ gives way to the usual madness of ‘The Spirit Of St. Louis’, an oldie that is still not proving any easier to get hold of, despite manic googling. As expected, Noble is climbing up the speaker stack before the song is barely out of it’s blocks. He poses on top of the speaker for a while before decamping up on to the old gits' shelf where we’re slumped. Only the length of his guitar lead, which is actually impressively long, prevents him doing a full lap of the balcony. 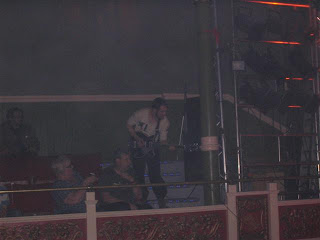 They finish with a demonstration of roadie Paul’s muscles??? and with Yan promoting their own brand ‘Zeus’ beer, which also seems to the title of one of the new songs, before eschewing it for a glass of white wine and sending us home with the terrific ‘Carrion’. So no improvised ‘Rock in A’ tonight.

I wasn’t expecting an encore but the crew seemed to be setting up the guitars again as if we’re going to get one but it’s already gone 11.00 so we’re not. There’s a bit of a frustrating delay before this is confirmed.

We head to the merchandising stall and purchase a bar of BSP chocolate, at £3 hardly a bargain but it will fuel us for the drive home. ‘Bar is not dark, bar is not light, it just tastes good, especially tonight’, so it says and proves. Most bands sell t-shirts, CD’s, posters and perhaps a few badges. BSP sell chocolate, beer and even tea. As well as mugs for the tea to be drunk in, mugs that allegedly do strange things when you add hot water but they'd sold out, so we didn't get chance to find out. Another reason to catch them next time, not that I needed one.
Posted by FitForNothing at 4:00 PM