In The Good Old Days

Thankfully L’s race, the Wymeswold Waddle which is part of Wymeswold’s Duck Racing festivities, doesn’t start until 10.30am, so we don’t have to be up at the quack of dawn. This gives us a bit of time to let last night’s curry settle down.

I’m just spectating which is how things always used to be, in the good old days, before I started to join in with this running business. Personally I feel I’m quite justified to opt out of something called the Wymeswold Waddle. It appears L will be racing against some very large ducks, one of which directs us to a parking space, showing just how diverse these creatures are. 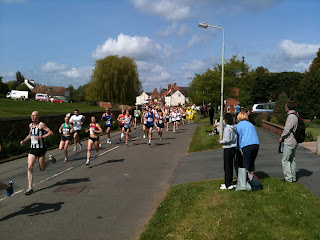 The course is a five mile route from the village to a place Six Hills (sounds hilly) and back. The winner storms it in 26:21... as I said, I’m well out of this.

We don’t stay for the duck races and instead join the masses at the DIY centres, where I purchase a new lawn mower for MD to play with, to replace the one that exploded the other week.

L buys one of these new fangled men hating toilet seats that refuse to stay up, we have one at work, phenomenally dangerous it is. Everyone’s had a go at adjusting it, well all the men anyway, so far without success. I fear some feminist plot or it may just be crap design work. I’ll be threatening ours with a large spanner and a pair of pliers later in the week.
Posted by FitForNothing at 4:00 PM