She May Have Miscounted

I get bus in and end up at work for 8.10. Not sure how that happened. You get the later bus and you end up late for work, you get the earlier bus, which is only fifteen minutes earlier, and you end up far too early.

After work I get the ‘slow’ bus straight to Bramcote Hills Park where L and I are both participating in this evening's Broxtowe 5k run. I’m using this as a 'gentle' warm-up for Sunday’s Double Duathlon, where as L is using it as part of a mad sequence of three runs in three days.

The race is organised by Broxtowe Council and they seem a bit taken aback by the number of late entries. So there’s a bit of a wait but it's actually pretty well organised. Surprisingly for what is quite a low key race they are using chip timing and all for an entry fee of only £4. So I imagine the council are subsidising a loss on this.

It doesn’t look to have attracted a particularly high class field and to be honest, not trying to sound too big headed here, I can’t see many people who are likely to beat me tonight.

The course is basically a lap and a half on the park, mainly on grass, not that exciting and not really my sort of course but as I said it’s only really a warm-up for Sunday.

When the race starts, I suddenly find myself in third place and chasing after two whippets of about half my age. Calm down. Remember 'gentle'. Not easy though, 5k is basically a flat out sprint, well unless you’re my age. 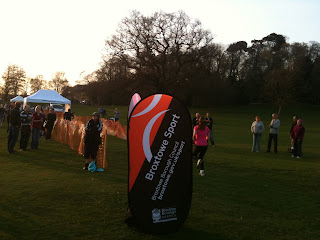 After a reality check, I’m not going to win, I settle down and realise I can still see the lead bike ahead. I count back from him and find I’m in eight place, not bad. A position I manage to hold until the finish. As I said, not bad out of 194! But as I also said, it’s a low class field. I find out the winner of the over-40 category came in 7th, so if I’d had a bit more in the legs, which I didn't have, I could have win that. In my dreams. L also does well, finishing half way up the field. 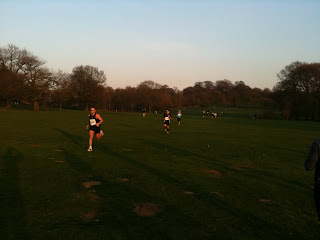 Then we retire to one of the local pubs, which is the best thing about Friday night races. The pub isn’t terribly impressive though, so we bus it into town and crash out in Scruffys for the rest of the night.

L probably shouldn’t be taking on so many fluids, as she’s running again tomorrow. Her strategy was supposed to consist of ‘three halves’, I think she may have miscounted.
Posted by FitForNothing at 4:00 PM