I’m resting the legs pre-duathlon today, so I’m on the bus. Which also gives me chance to get some more of ‘The Girl With The Dragon Tattoo’ audiobook in before we see the film tonight. Not much chance of finishing it though. I’m over ten hours in now but there’s still another eight to go. Not sure I’ve ever read (sorry listened) to anything that long.

Fascinating though it is, after ten hours the two main character still haven’t met and there have been no developments in the case of missing girl, which is what the whole book revolves around.

Then out of the blue, on the way home, the book suddenly bursts into life. A lead in the case is finally discovered and I have to walk very slowly before standing outside the house for a few minutes to see what develops.

Then in the evening it’s the film itself, which is part of Broadway’s Nordic Noir season which in turn is part of the ScreenLit festival. It’s also the first instalment in the eagerly awaited competition this weekend between the two ‘other’ men in L’s life. Tonight Mikael Blomkvist, then on Sunday Konrad Sejer. She seems to have a thing for fictional characters.

There’s something immediately odd about the film version of ‘The Girl with the Dragon Tattoo’ and that’s the translation of the title, which in Swedish is ‘Män som hatar kvinnor’ or ‘Men Who Hate Women’. This actually gives a bit of the story away, whereas the Anglicised version doesn’t.

The story itself is the first part of Stieg Larsson’s ‘Millennium Trilogy’, so I can see us being with him for the long haul. Larsson was unlucky enough to die of a heart attack before the publication of any of the books in his trilogy, so he never got to see how popular they would become nor see the films they would spawn.

The film is two and a half hours long, so it should be more concise and to the point than the eighteen hour epic that is the audiobook. It opens with the delivery of a package from Hong Kong, a pressed flower in a frame. The recipient, Henrik Vanger, receives one every year and one thing I’ve never quite understood in the book or now in the film is why he assumes it is from his missing niece’s killer, and not from the niece herself, which would of course suggest she wasn’t dead after all. Anyhow, swiftly steeping over that plot hole.

Vanger has been trying to solve the mystery of the niece, Harriet, for forty years. That is how long she has been missing. Now he decides to employ an investigative reporter called Mikael Blomkvist to have one final crack at solving the mystery before the ageing Vanger’s life comes to a close. It has become an obsession with him and over the years he has gathered a lot of information relating to the case but this hasn’t taken him any closer to finding out what actually happened to her. The disappearance happened during a family reunion on their isolated island and at the same time the only bridge linking the island with the mainland was closed due to a road accident, so Vanger is convinced that a member of his own family is responsible. 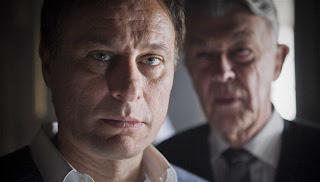 Blomkvist is sort of at a loose end after recently losing a libel case over an article he wrote for ‘Millennium’ magazine, a magazine in which he is involved with. He has had to resign his post there, as well as being required to serve a three month jail term, so he takes up Vanger’s case. He quickly discovers that the Vanger family are a weird bunch and also one with Nazi connections. 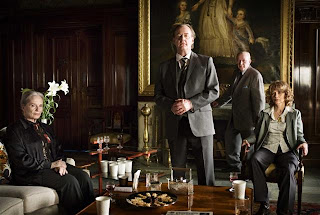 Eventually Blomkvist forms an unlikely alliance with the much younger Lisbeth Salander. Salander is an intriguing individual, a multi-tattooed, multi-pierced, leather clad biker chick type with a troubled past, who hacked her way into Blomkvist’s computer. She’s a former psychiatric patient who now has her financial affairs managed by a guardian. Her guardian is a nasty piece of work and we get to know Salander through some horrendous scenes with him. 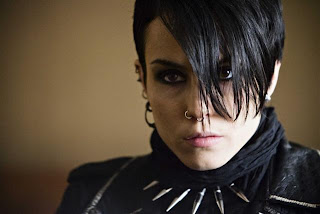 Once together, the investigation starts to make progress and they follow a complex set of clues that reveal a string of sadistic murders of women going back decades. They realise they are tracking at least one serial killer, if not, due to the time span of the crimes, two. Things then get more serious when someone takes a pot shot at Blomkvist whilst he is out running and then when he makes a visit to one of Mr. Vanger's brothers who he thinks is involved, he ends up with the old man pointing a rifle at him. However Martin, Harriet's brother, saves him but when Blomkvist spills the beans about what he’s discovered in his investigation, he ends up drugged and about to find out who really is behind it all.

Salander has to rush to his aid, saves him, chases the murderer and then for an encore supplies the vital information that solves the mystery of Harriet. 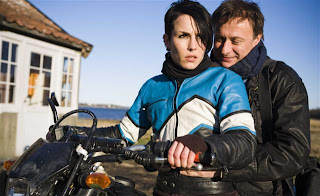 It’s a grisly tale of murder, set amongst the cold Swedish winter, lightened somewhat by an upbeat ending. I thought it was quite a good effort at getting the marathon text of the book down to just a few hours. I don’t think L was quite so sure and there are several things that have been changed or airbrushed completely out of the story.

Still I look forward to the other two books in the trilogy and the films too, which have already been released in Scandanavia and the first of which should be out here later this year. Needless to say, just like 'Let The Right One In', a Hollywood version is already in the pipeline. I wonder who’ll play Salander?
Posted by FitForNothing at 4:00 PM