Here’s a rarity. A bit of a ‘perk’ from work, albeit a small one. After 15 years or more I finally get an invite from the company to go to the ‘Recycling and Waste Management Exhibition' at the NEC. Wooahhh. Small steps perhaps. Only an afternoon though, let’s not get carried away.

Four of us go in the same car. How hard could it be to drive to the NEC? Simple you would think? Not according to our drivers SatNav, which makes an appalling choice of route. Our driver can't function without it, so contradicting the SatNav took her well out of her comfort zone. Probably didn't help that her passengers disagreed among themselves on the route as well but at least we all agreed to disagree with the SatNav.

The show was ok. Interesting, ish. Although I met a few customers who I’d rather not have done, sometimes it's best to stay anonymous. Apart from one, it was nice to put a pretty face to the voice, particularly as I had her down as a bit of a... perhaps I best not put down what I had her down as. 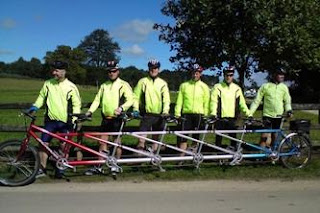 Which reminds me, I must get the bike out tomorrow.

Would you believe they're doing Land's End to John O'Groats on that six-seater bike. Why...

Apparently ‘it's not so good at going around corners’. No kidding. I can imagine. Terrifying more like. Bet it takes some stopping as well, particularly on the downhills.

It’s all in a good cause though. The men are cycling to raise money for Bowel Cancer UK, Breakthrough Breast Cancer, Cancer Research UK, Macmillan Cancer Support UK, Mesothelioma UK and Myeloma UK. To learn more or to support them, visit www.saddle-row.com.