Battle Of The Sexes. Lost.

The big day arrives. My biggest race yet. The Nottingham Half Marathon. 12,000 signed up apparently, this transpires to 8,000 entries in the half-marathon but only just over 6,000 finishers. This means, I hope, that there were quite a few who bottled it and didn’t start, rather than assuming that 2,000 who keeled over on route.

My father comes over to support and I do him a schedule so that he can see L and I at as many points as possible at the 4, 6 and 9 mile marks which are all close together. L predicts she’ll be finished by about 3pm, so I’ll have time to nip home, put lunch on, have a hot bath, before coming back to pick her up. Ha. I’ll expect her about 12.30, which will give me ample time with the University’s massage girls.

I’ve been allocated a start in the red zone, which is the second zone from the front, just behind the elite. So I can actually see the start gantry with my naked eye rather than needing binoculars like some of the other zones further back will need to do.

Then we’re off and heading into Nottingham and up past the Castle. After which we head out to the University. I wave to my father at the four mile point. He's on the wrong side of the course, the outside, marooned. Meaning he can’t get across the runners to the other two viewing points. So I won’t see him again.

Then it’s through Wollaton Park before heading back into Nottingham. The route has been fairly hilly, as I had expected, but not too bad. I reckon I’m on course for a 1:34 time (perhaps) but then suddenly the last three miles seem really tough and then with around a mile to go we end up running into a head wind. The legs start to get a bit heavy and I lose a lot of places in that last mile. A couple of girls against whom I’d been winning the battle of the sexes, go past me and as for ‘Big Mike’, well that’s what it said on the back of his shirt, who I’d followed for the first twelve miles, he pulls away and disappears into the distance.

My time is again 1:36, the same as my previous best, although on closer inspection I have shaved 10 seconds off it. Not bad I suppose, all the same straight away I head for solace in the massage tent.

L had jested that I’d need a double slot for my knotted muscles. Well... I got it. A masseur on each leg, regrettably one of them is male but you can't have everything I suppose and it's actually the lass who's the evil one.

They patch up my muscles and then I go to meet L, who does her best time for years, a lot faster than either of us had predicted. Then we discover that we can’t dally for long, our supporter, my father, has a flat car battery and we battle out way around the closed roads to get to him. This takes over an hour. Then finally we get to crash in a hot bath before heading out for a well deserved lunch.

It would be nice to get quietly drunk tonight but good gigs don’t come around on the days you’d prefer to have them and tonight we head over to Birmingham for the second time in four days.

Having been smitten by the Handsome Furs, whom I stumbled across last year, it only seemed natural to investigate Dan Boeckner’s other band, Wolf Parade, who conveniently booked a date at the Nottingham Rescue Rooms but then later cancelled it. In between L had rushed down, she says she quite fancies him, and got us tickets. Then suddenly they’re not playing Nottingham any more, citing scheduling issues. So rather than being disappointed we decide to go to Birmingham, where they are playing the Glee Club... which conjures up horrid images of America TV programmes...

The Glee Club is actually predominantly a stand-up comedy venue that has expanded into music. Situated in Birmingham's Chinese Quarter close to the Hippodrome Theatre, it opened in 1994. Since then they have opened venues in Cardiff, Oxford and now this month, one is scheduled to open in Nottingham.

Quite what the name has to do with comedy I’m not sure, the TV series had one thing right; traditionally a glee club is to do with music.

Support tonight is from Peter Kernel, who we thought was probably a soloist but may even have been a comedian but we’re totally wrong. ‘He’ is a three piece from Switzerland and as they start up, the floor immediately starts to throb under the assault of the very heavy bass. My ears will probably be out of commission tomorrow. Musically they sound a bit like our own Johnny Foreigner with the interplay of words between their female bass player and male guitarist. Then again, the girl kind of fancies herself as a Kim Deal I reckon and the chap doesn’t do anything to dispel the Pixies comparisons. That all sounds quite promising but for all that they are oddly unsatisfying. 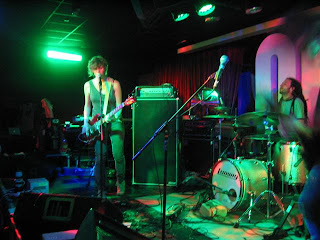 So to Montreal’s Wolf Parade. I’ve been digging though Wolf Parade’s first two albums which are full of great moments but something about them just doesn’t completely satisfy then last month their new album ‘Expo 86’ dropped through my letter box and it’s bloody brilliant.

The ‘Expo’ is that big exposition ‘fair’ type thing that Prince Albert started up 150 odd years ago and now travels around the globe every year. Expo 86 was held in Vancouver and apparently that is where five young boys first became friends and made a pact to meet up sometime in the future to form a rock band. Believe it or not, that is the alleged beginning of Wolf Parade.

But never mind all that, they are now just a four piece who still find time to do Wolf Parade between their assorted side projects. The band take the stage and Dan Boeckner launches into ‘Soldier's Grin’ from their second album. 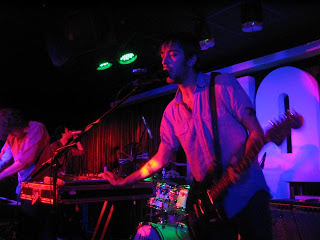 Boeckner, on the guitar, democratically shares lead vocal duties with keyboard player Spencer Krug, who promises us a mix of old and new songs without obviously playing the one you really want to hear. He takes vocals on ‘What Did My Lover Say?’ off the new record before handing back to Boeckner for another new song, the wonderful ‘Palm Road’. 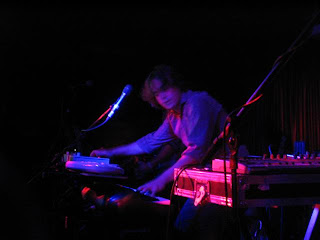 Krug and Boeckner have complementary but differing styles and talents. Krug’s songs are more poetic and melodic such as on ‘Dear Sons and Daughters of Hungry Ghosts’ and he works away busily on his array of keyboards and other assorted electronic gadgets. He is not only a man in dazzling control of the technology at his fingertips but it is equally enthralling to see him perfectly in control of his stool, which he rarely sits on but instead manages to pivot around with his foot, never once losing control of it.

Boeckner is more old school. He belts out his numbers and pours passion into both his singing and his guitar playing. Whipping songs like ‘Pobody's Nerfect’ off the new ‘Expo 86’ up into a fervent, hot-blooded frenzy. 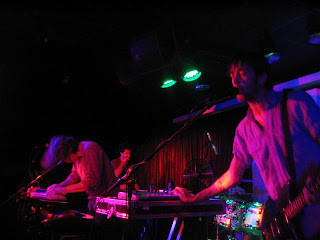 As a new recruit to the Wolf Parade cause I find all the new songs sound terrific tonight, although so too do oldies such as ‘This Hearts on Fire’ and ‘I'll Believe in Anything’ which are less familiar to me. 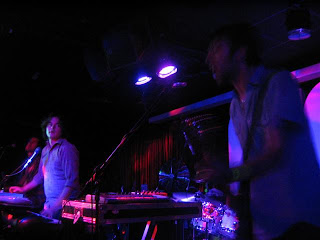 When they are not playing the lead Krug and Boeckner back each other up well, letting their respective instruments take a more background role. Everything combines together very well. In fact, the band as a whole have a lot of chemistry and that always makes for a good live show. On the other side of Krug to Boeckner is Dante DeCaro pummelling his guitar as hard as Boeckner does while behind them Arlen Thompson is a thunderous presence on the drums.