Bit Of An Understatement

L is annoyed. Well that’s a bit of an understatement.

Her weekend, during which she was taking part in two of the swims in Lake Windermere, one of the mile swims on Saturday and the one-off two mile on the Sunday, has been cancelled. Well, actually officially postponed, which is not much good when you wake up on the Friday of a four day break you’ve booked time off for, for the specific purpose of doing those events.

Apparently the organisers are looking at a potential new 2010 date but I can’t see that happening. The algae isn’t going to clear overnight and we’re heading towards winter now.

Where were their contingency plans? Could they have done the swim in another part of the lake or perhaps in another of the lakes?

I switch the computer on and draw up a short list of races in nice places off the Runners World website, ones that will take entries on the day. After a brief debate and several strong coffees, Caernarfon comes a close second, because there’s no t-shirt, to something called Alice’s Run, a 10k near Hebden Bridge, Yorkshire, which does. I feel a weekend based in Malham would be just the ticket. It’s a place I’ve wanted to revisit since we went there a few years ago. Comparing our combined memory banks we actually work out that our visit there was as far back as 2002... How time flies.

Anyhow, car packed and we’re off.

We check into exactly the same campsite as in 2002, and I remember it surprisingly well. 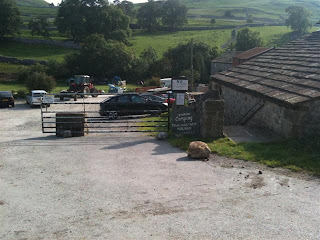 In fact I’m sure none of the toilet doors locked back then either. There are other more pleasant assorted memories that come flooding back along memory lane as well. Of course on that trip we had two youngish children with us, aged 9 and 11 and a very young collie. Doggo would have only been a year old. That young collie disgraced himself on several occasions as I recall. MD would have been so proud of the old man.

We walk into one of the two pubs in Malham, The Buck Inn. 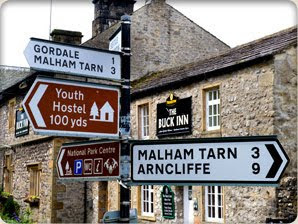 Again it brings back a few memories but I don’t remember this... Old Peculiar on the bar. Well that's me placated.