Day two of competition and the brie doesn’t seem to have quite the same effect on MD today but Doggo picks up the baton and has a cracking day. He’s 8th place on one of his jumping courses is our best for a long time and really good at his level. He is three levels above MD. He also picks up another rosette for 16th when we’re pitched up against the ‘professionals’ in grade 7 in a later class which is also highly impressive. Unfortunately he’s also mortified when I again bundle him back onto another contact that he tried to skip. We will relearn this skill.

As regards the ‘pocket rocket’, I decide it’s sh*t or bust today, particularly as we have three jumping courses, from which he can’t get an automatic promotion, and only one agility course. Basically I push him to go faster and so the poles started tumbling. Oh well, so out of sh*t or bust we got the former but it was worth a go.

On one course he’s going so fast, he misjudges the tyre and clips it as he goes through. Well, clip doesn’t really do it justice. He hits it so hard he uproots it and leaves it lying on the ground. I think surely that must have hurt but he doesn’t seem to notice and carries on to complete the course where he grabs his lead and turns around to me, asking ‘Have I won?’. Well, no. I look back at the course where several poles are scattered over the grass and where the judge and two helpers are trying to reassemble the tyre obstacle. Funnily enough, I don’t think we actually got faulted for that. It’s a bit of a grey area I think. We flattened it but he did actually go through it which I think is all the rules require.

We take it slightly easier on his agility course and do better. All the poles stay up but he is again quick. This is despite us wasting precious seconds at the tunnel having a stand up row about who was right about which way to go next.

He relents; we carry on and get 10th!

So six rosettes this weekend, three for each dog and two trophies for MD. It’s been a good trip. Naturally we celebrate by driving into Durham, leave the dogs in the car and go for a curry. Sorry guys. 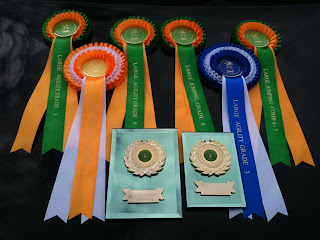