I'm on the bike today which after yesterdays run probably wasn’t a great idea but it wasn’t as painful as I expected. Almost enjoyed it.

L sees a student in the Co-Op wearing a dressing gown and slippers. Ah, the student life. Not wanting Son to feel uncool she considers equipping him with similar appropriate attire for when he goes next weekend. I wasn’t sure he’d thank her for such a suggestion but... he appears keen, on the dressing gown at least. 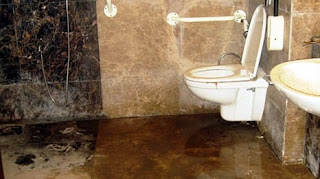 The latest photos of student digs for the coming year have been released. 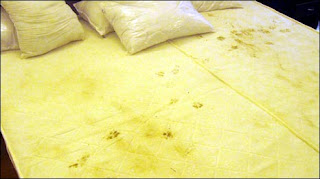 Oh hang on, those are from the athletes village at the Commonwealth Games in Delhi.

At the end of the day I move back into my ‘new’ old office. An added feature is that they have moved my boss into a glass box in the corner; well a glass partitioned office anyway. So at least we can now keep an eye on him or perhaps the intention is the other way around.

The weather has been a bit iffy all day and when I look out of my window at 5pm, it’s suddenly gone very black... By the time I get downstairs and to the door, the monsoon has started. Thankfully it doesn’t turn out to be as bad as it looks and I get home just 'slightly damp'.

I’m quite pleased with my portfolio of decent shots at squash tonight. In fact, some of the best I’ve played for a while. Unfortunately I alternate them with my other portfolio, the one of miss-hits and air shots, which balances things out.

L walks over from the gym to join us for a pint. Which is a relief, I’m that tired I need someone to lift my pint for me.