Well that wasn’t the gentle training run I was looking for. I missed the R4 bus because it was on time for probably the first time ever and I was a touch late. Then just as I was resigning myself to getting the Red Arrow straight to Derby and then making up some kind of loop around Derby to run to work, an Indigo turned up unannounced. It was probably running late. This bus though takes a longer route and I got off it earlier, as soon as we got into Borrowash, which also gave me a slightly longer but more pleasant run. Then I had to leg it to make it to work in time. Knackered.

L apologises for not showing concern and not checking my ‘injury’ last night. Those are her inverted commas, not mine. She questions whether it was my body rebelling because I've not cycled for so long. I’m sure she’s right. Then it rebelled because I hadn’t swum for so long. It’s just one big rebellion at the moment.

My foot seems ok now though. All the same, she best check me all over for damage tonight. This will have to after Jónsi, for whom we will have to leave early, if we want to be up front.

The well made plans of L and I fall apart with the closure of the A52 out of Derby. Derby is a city in a state of chaos as I attempt to get the bus home. I arrive at the bus station in time for the 5.20pm but finally get an ‘every ten minutes’ Red Arrow at 6.00pm. Unfortunately a bad situation is made worse by Derby’s ‘cleverly’ designed bus station. Buses heading out are blocking the paths of those coming in. We watch our Red Arrow for a good 15 minutes across the tarmac, stuck the wrong side of the steel fencing that enforces the internal one-way system as it queues with the buses heading out. When it finally gets to us, and we get on-board, the bus then has to rejoin the same queue to get back out of the bus station. This isn’t the first time this has happened. Surely now they'll take this pointless fencing out or at least put a gate in it.

So we’re a touch late heading off to the Birmingham Academy where ‘Riceboy Sleeps’ an instrumental album by Jónsi and his other half, Alex, who is also part of his band tonight, is playing as we walk in. We have missed the support band, Mountain Man, who are (obviously) three girls from Vermont, USA. That's the first time for a while. Thanks to the good old A52, Derby bus station and a helping hand from the dire road system of Pride Park.

I’m not sure what I’m expecting tonight. Only that the whole Jónsi experience is going to be a bit different. The things you do for love.

Jón Þór Birgisson is better known as the guitarist and vocalist of Sigur Rós, a kind of Icelandic Cocteau Twins. A band who, after 16 years in existence, are now on ‘indefinite hiatus’ presumably having temporarily ran out of new ethereal soundscapes to craft and have all gone off to have babies, an option not open to Jónsi.

The thing with Sigur Rós was... well... I have to be able to sing along to my music, which is why this new wave of instrumental bands just don’t do it for me and with Sigur Rós, Jónsi went one better than being instrumental and choose to sing not just in Icelandic but also in some made up hybrid that he called Hopelandic, or Double Dutch if you prefer. Tonight though, cue drum roll, because Jónsi’s debut solo album 'Go' is predominately in English, we won’t need subtitles, mostly.

Suddenly a couple of chaps amble on to the stage, catching everyone by surprise and probably some folk still at the bar. It’s the man himself and his drummer Doddi. It’s the most low-key of low-key starts ever and Jónsi keeps it simple for ‘Stars in Still Water’ with just his guitar and a little added glockenspiel courtesy of Doddi. 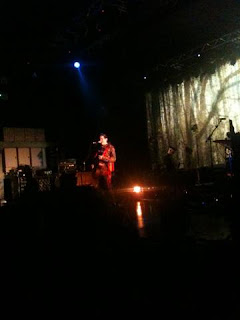 The rest of the five piece band join them on stage, then after dabbling with the English language on the opener, Jónsi reverts to Icelandic or whatever for ‘Hengilás’, while Doddi get serious with the glockenspiel playing it with a couple of large orchestral bows.

The music I suppose is broadly similar to that of Sigur Ros but far easier to get into, the songs are shorter, happier, poppier. Making it all more accessible for the Academy crowd tonight. The somewhat large Academy is though, I would guess, only about half full.

The set seems to be cleverly structured. The slow numbers come first, building things up, through moments like the thumping bass drum finale to ‘Icicle Sleeves’, eventually bringing us to the faster numbers, whilst saving the epic ones until last. Not that it's not all epic.

The band alternate between a selection of instruments, continually swapping roles, while Bass player Ulfur Hansson plays with a brace on his hand. His thumb struck permanently upwards after slicing his hand open on broken glass after their Gothenburg show last week. They all engage in what appears to be a mass xylophone love-in session before ‘Tornado’ and then Jónsi takes over at the piano for ‘Sinking Friendships’ as he works his way through the entirety of ‘Go’ plus a smattering of unreleased tracks. 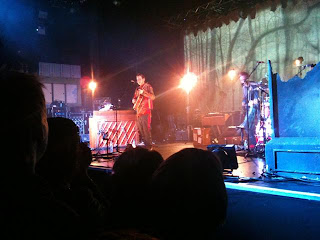 Visually too it is spectacular. A continually changing animated backdrop accompanies the music, brings us a steady flow of assorted woodland animals, birds and even a wolf who appears to be stalking them all.

So far he hasn’t uttered a word to us and then when he does, to introduce ‘Go Do’, it’s such a shock no one knows what to say. There seems to be a brief moment of embarrassed silence on both sides before he picks up a ukulele and then suddenly an audience that has been mainly transfixed to the spot so far, is suddenly rocking to ‘the hits’.

He even offers the mic to the crowd during ‘Animal Arithmetic’... Yeah right. Love to mate but... even in English the lyrics still tend to leave you a little bewildered ‘Wake up, comb my hair, making food disappear, riding bikes, making out, elephants swimming down...’ 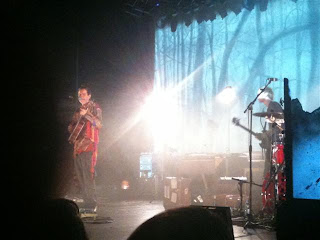 He slow things down again with something called ‘New Piano Song’ which is a bit more than what the name implies. Then to close ‘Around Us’ for which he starts seated at the piano before seamlessly handing over the ivories to come back centre stage. The set ends with the band leaving Jónsi alone crouched at the front of the stage doing his best ‘My Bloody Valentine’ impression only without the guitars, generating plenty of feedback with only a microphone at his disposal.

The band return quickly for an encore with Jónsi wearing a Red Indian head dress and starts with the up-tempo ‘Sticks and Stones’ from the score to the film ‘How to Train Your Dragon’. Then to finish ‘Grow Till Tall’ appropriately grows in stature, the animated screens fill with rain and the band are drenched in strobe lights as the show comes to a dramatic conclusion. 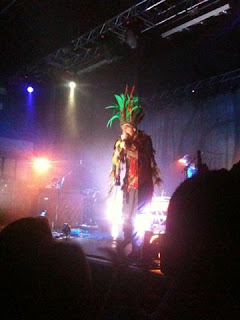 Then after the encore the band come back on to the stage, take a bow and clap the audience, just like at the theatre, and it’s a nice touch.

I know exactly what L is going to say before she even opens her mouth, ‘gig of the year’. Well... It was unique. Different. An experience. Rather good actually. Maybe not gig of the year, but up there. Well worth going to see ‘Go’.