We are heading up to County Durham for the weekend and a dog show thing but first L suggests we take the boys out for a morning run, so they’ll be nice and tired for the journey. I could have pointed out that they’re always nice and tired, even when they haven’t done anything, stamina is not their thing, but I don’t. Instead we reload the loose cannon and off we go. The cannon is particularly loose today. Thankfully it’s not that early, so we don’t have to apologise to the neighbourhood on MD's behalf for awakening them

Then we head up to Witton Castle, which is somewhere near Bishop Auckland. It’s a nice location and very un-dog show like. 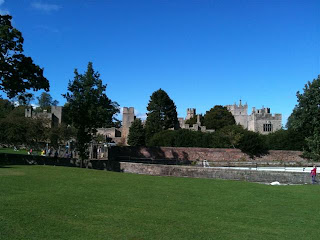 It’s a pleasant one mile stroll from there along footpaths to the village of Witton Le Wear which we soon discover has two pubs. One is almost empty but doesn’t do food or accept dogs. The other is busy, has an extensive and cheap food menu including the vitally important cheeseboard, and welcomes in Doggo and MD for their sins. There may be an economic lesson in there that’s so obvious I won’t point it out.

Unfortunately pub one has the slightly better beer but it’s not so significant to make that much of a difference to us or seemingly anyone else for that matter.

Neither of the pubs sport a local beer, which is very disappointing and means I enjoy good old Bombardier (brewed in Bedford) for most of the weekend. The most interesting beer, on at pub number one, is the exceedingly rare John Smiths cask, once of ‘nearby’ Yorkshire but now being brewed in Cheshire. This has all but vanished in a sea of their ‘Smooth’. It’s always been pleasant and still is despite its move away from its traditional home. Sadly it is the only cask beer I've seen that has to be labelled 'cask' to differentiate it from it's ugly brother called 'Smooth'. 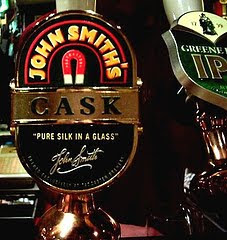 The dogs have a right old feast tonight, kettle chips, naan bread from my curry and for dessert, crackers from my cheeseboard accompanied, of course, by their usual brie.