A Lot To Cram In

Due to today’s football match being moved to a 1pm kick off, not for television but on police advice, because there was some skirmish between Sheffield United and Derby supporters a few decades back, I have a lot to cram in this morning.

Such as waking up early, so that I can get as long a lay as long as usual on a Saturday! Then I still need to find time to take the boys for a session on the park. When we get there, we are momentarily distracted by one of those ‘military fitness’ sessions, that seem to be so popular at the moment. This instructor had his group, of predominantly young women, crawling around on all fours for, what seemed, far longer than necessary. That is, if it was necessary at all. Hmmmm.

The 1pm kick off makes no difference to the result. Derby lose again and the sole highlight of the game was the ironic cheers for their first and only shot on target after 76 minutes. The ‘no strikers’ strategy, a kind of lopped Christmas tree formation, clearly isn’t going to be prolific.

In the interests of an alcohol free evening, we have the half marathon tomorrow, we take in a play tonight, ‘She Stoops To Conquer’, a comedy by the Irish author Oliver Goldsmith dating back to something like 1773. 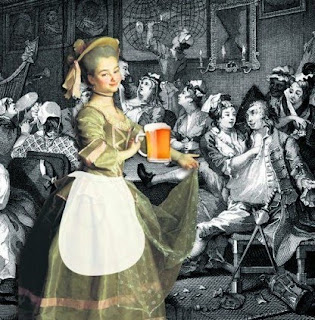 The plot concerns a wealthy country squire called Hardcastle who arranges a blind date of sorts between his daughter, Kate and the son of an aristocrat called Charles Marlow, hoping the pair will get it on together, marry and therefore he’ll find someone else to fund his presumably high maintenance daughter. Unfortunately, whilst Marlow apparently flirts with ease with ladies of a lower social standing, he becomes tongue tied and awkward around posher totty. The resourceful Kate though is willing to ‘stoop’ to the any level it takes and decides to pose as a barmaid. Presumably on the premise that a man will always notice a lass serving beer.

That all sounds quite promising, which I guess is why we’re here but... I don’t know, it does little for me but then perhaps I’m just not in the mood tonight. It is a play of slightly dubious comic appeal based upon multiple misunderstandings and mistaken identity. Sound familiar? Very Shakespearean. It also launches off into various sub-plots, again ala Shakespeare. I love a bit of Shakespeare but I much prefer his tragedies and histories to his unconvincing comedies but then I don’t really do comedy.

Kate’s disguise consists of just a mere cord that she ties around her waist. Instantly making herself unrecognisable as the daughter of a country toff and becomes a simple barmaid... but then she picks up a feather duster. I’m already confused, and I’m sure she could have been more resourceful and come up with a more effective approach if she’d thought about it but I guess this was the 18th century.

The most confusing bit though is when Marlow and his mate, who on the way to the Hardcastles' manor for his blind date, get lost and stop off at the Three Pigeons pub. There they are played a joke on and are told that they are a long way from the manor and will therefore have to stay overnight at an inn. Then they are told that the Hardcastles' house is an inn, so they turn up there, get drunk and treat Hardcastle himself like a landlord... but it’s supposed to be a country manor house... that’s too far fetched for my logical mind.

Everything of course sorts itself out in the end. Kate's plan succeeds and she gets her man. The acting is good, as it usually is at the Playhouse house, but personally I thought they were all upstaged by the oversized animals, particularly what I think was a dog. 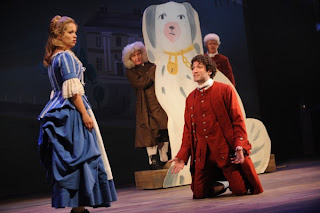