12.5 mile run, 60 miles on the bike and 45 minutes of squash. I suppose it doesn’t sound much over three days but this morning I wake up and can’t feel my legs. It’s like a great weight has been sleeping on my legs all night. Which they probably have. Then I feel the sensation of two tongues licking my flesh. This would almost be a nice fantasy if I didn’t know that any minute now I’d be receiving a furry paw in the stomach. I push the dogs off me and roll over searching for some female company but L has gone. Blimey she never gets up this easily on a school day.

She runs off to the shower before I can apprehend her. She’s off to Milton Keynes today with Daughter to meet up with her sister and to go see Hairspray on the stage. I don’t know. All that way for Les Dennis and some shopping. Must be a girl thing.

I take them to the bus station and then let the boys help me cut the lawn. MD seems to remember the telling off I gave him last time and rather than attempt to savage the mower, instead he glares at it from a distance.

Then it’s the match. Derby v Crystal Palace and Derby win 5-0. Blimey. Where did that result come from? Our new Spanish superstar Alberto Bueno, only on loan regrettably, shows the others how to strike a ball, first time, no messing and on target. Simple really. 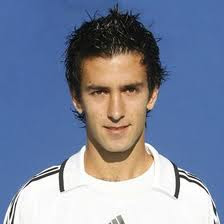 Later I collect L and Daughter, who look remarkably well and even entertained considering that they’d spent the afternoon with Les. Daughter comes back with a new fur coat, 100% acrylic naturally, she’ll kill me for saying that but at least we’ve not contributed to the slaughter of anything. Doggo immediately starts eyeing it up amorously. He’s weird like that. L has new boots, which I start eyeing up amorously, much more interesting.

After dinner, L can tell me all about Les, over a bottle of wine in bed.