You May As Well Be Walking

It’s minus two this morning; I skip the bike and get the bus which is a bit tame. I might run later depending on what time we have to be at the gig tonight. I haven’t managed to get hold of the stage times yet.

At squash last week we were all discussing how L runs at 11kph on a treadmill whereas my squash opponent only runs at 10kph. He seemed horrified to discover this fact but claimed to not be unduly bothered by it, but all three of us knew where it was leading.

This morning the email arrives ‘I blame L’ he complains. ‘After all her talk of "oh, I couldn't possibly run any slower than 11k, I mean, you may as well be walking!"’.

Oh dear. So as expected he just had to have a go and now he’s regretting it. I email him to check that he wasn't thrown off the machine into the back wall. Seems not and he ran further than usual because the episode of the comedy he was watching hadn’t finished by the time he’d completed his usual 3k. I would have thought all this was to the good... but he’s not happy.

I daren’t tell him that L has since confessed to me that she's now actually running at a sneaky 11.2kph. Then again, I consider telling him she’s doing it at 12kph... but decide it’s probably not advisable. L accuses me of deliberately planting sneaky little seeds about this kph thing in both of their minds. Moi? As if.

Tonight’s stage times afford me a small window of opportunity for a run. So I do the jog-bus-run scenario again, only this time without a whippet to pace me. Which is a shame but probably for the best; at least my legs think so.

Meanwhile L goes off for a pre-gig gym session warning that if she's got a black eye and a broken nose afterwards it's because she’s gone for 12kph. I’m to pretend not to notice. Blimey, she’s getting almost competitive and that seed has sprouted roots.

I’d be so proud of her if she’d done 12kph, black eye or not. Though if she’s in casualty and needs collecting I'm kind of busy until at least 10pm tonight. Thankfully when I meet L in town later there are no signs of bruising.

L's only here for the blood, that is Florida’s Surfer Blood. After that I might have to keep her awake through the ninety minutes of the morose majesty of Interpol.

There has been quite a bit of internet chatter about Surfer Blood and they are certainly different from tonight’s headliners. For a start singer John Paul Pitts is attired a touch like a public schoolboy but they also sound totally different.

They launch energetically into their first track 'Fast Jabroni'. That is as energetically as a five piece crammed into such a limited amount of stage space can. It's a good song and they appear at their best when they are playing simple up-tempo guitar driven pop songs like that, rather than the few slower numbers they throw in. 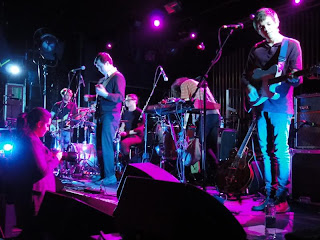 However a few songs do veer off successfully into different styles and show they’re capable of mixing it up a touch, such as on ‘Twin Peaks’ where there’s all sorts of things going on. Their best known moment so far though is the annoyingly catchy anthem that is 'Swim', which closes their very short set.

The band are pleasant enough in a quirky sort of way but are just one of several bands doing this sort of thing at the moment. What other bands don’t have perhaps is a keyboard player with such impressive hair along with a set of maracas and other cool things that he keeps in a bag of tricks slung under his keyboard.

Presumably it's usually the record company’s idea but bands should never self title an album. It's just plain dull for a start and utterly pointless. You should know who the album is by, I would hope, and it's so lazy. It shows a lack of creativity which tends to be repeated throughout the tracks on the album, so it should serve as a warning to us buyers as well. If you must do it. First album only. Never after that. Certainly never your fourth as Interpol have done.

The signs are that the band themselves aren’t that enamoured with it either, which backs up my thesis, because only five tracks are played from it tonight. Add to that the fact founder member Carlos Dengler left straight after the album was complete to 'concentrate on other things'. Maybe this shows he wasn’t that keen on it either. That said; it isn’t too bad. A little underwhelming on first listen but it's a real grower. Carlos, you should have given it another spin mate.

'Success' the opener on the album and also the opener tonight, is slower, steadier and more funereal than their last two albums, harking back to the style of their debut, 'Turn on The Bright Lights'. Things immediately get a touch livelier with the next track, a rocking 'Say Hello To The Angels', proving that they had rare upbeat moments even on their debut album. 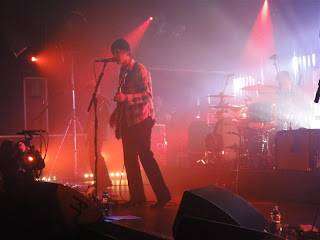 The plus side of the new album only being lightly touched upon was that tonight became pretty much a retro night and this yielded a quite brilliant set full of juicy treats with six tracks from each of their first two albums.

'Antics' supplies us with ‘Narc’, which soars along whereas ‘Length Of Love’, a nice extravagance, swaggers.

With Carlos D gone, the new boy on bass is David Pajo, who it has to be said is pretty anonymous throughout. Perhaps he’s nervous; he appears to have a quadruple brandy next to his water. Is this to help him get through it?

Main stays guitarist Daniel Kessler and main man Paul Banks, who met in a philosophy class you know, are positively lively by comparison. The band’s lack of mobility is legendary but they are far from statuesque tonight. Not that they leap around the stage or anything. That would have somewhat spoiled things. 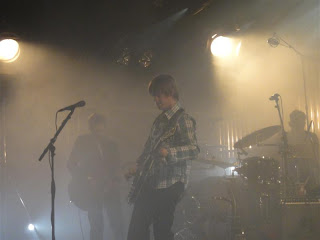 Paul Banks is positively chatty, well almost. He even puts names to a couple of songs. Nice hat by the way Paul. He even smiles a bit. Daniel Kessler smiles a lot and his expertly delivered guitar hooks are accompanied by some neat footwork.

There’s only one track from 'Our Love To Admire', which was a bit harsh on what isn't a bad album and 'Rest My Chemistry' wouldn't have been my choice either but it’s affecting enough. 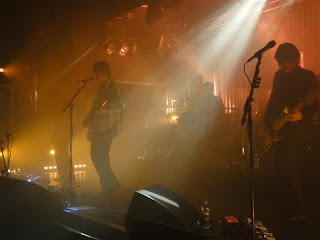 Everything is accompanied by a never ending fog of smoke that envelopes the barely lit stage, so the band all have their own little lights so that they can read their set lists. All this means there’s not a lot to aim the new camera at. So it’s just a case of stand back and appreciate the music which is as tightly performed and as expansive as expected.

The trio of hits from 'Antics', their more populist more upbeat album, are all present and correct: - 'Slow Hands', 'Evil' and 'C'mere' and it helps to lighten the mood of the darker stuff. Those numbers also blend well with recent single 'Barricade' but it was their choice of oldies that excites and makes it such a great night.

‘NYC’ isn’t always in their sets, which is a shame, as it’s just so fantastically moody and wonderfully done tonight, wallowing in its own exquisite misery. As for ‘Leif Erikson’. Just amazing. Well I think so but L’s looking a bit bewildered. I guess with Interpol you either revel in their intensity or... well, not.

There are some new slow burning epics too. Particularly the dazzling 'Lights'. When Banks poignantly cries ‘That's why I hold you dear’ you feel that perhaps he means it. 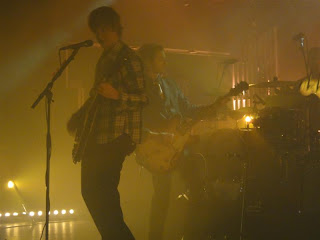 They close with a thumping 'Not Even Jail' which means that 'The New', a real rarity that sent the forums all a chatter when it surfaced mid set at their last gig two nights ago in Germany after (apparently) seven years of not begin played, isn’t in the set tonight.

Ah, but it is. Disappointment turns to delight as the encore from heaven for any hardcore Interpol fan follows. Not that I would regard myself as hardcore but anyway. You would have thought it unlikely that they'd play 'Untitled' but to not only play it but then follow it with 'The New' and then 'PDA' is simply sensational. That’ll upset them and make them drool in equal measures back in their home country across the pond. That’s an entire encore from the darkest depths of ‘Turn on the Bright Lights’ and some way to finish.