My Sort Of Mission

I’ve spent the last few days setting up for a meeting that was arranged for first thing this morning and then suddenly it’s cancelled. The guy claims car trouble but I reckon he just didn’t fancy driving up from Norfolk in the rain. It is totally foul out there.

Oh well, all is not lost. There’s still the pre-ordered buffet lunch to dispose of.

In lieu of her new Madonna image L slots on the bottom of today’s shopping list ‘tights - your choice’. I like that sort of mission; I can let my imagination run riot. Although she’s probably expecting something in plain black or maybe she’s hoping for something more Madonna-esk. Hmmm. I think I’ll play safe, in any case she will want something that’s warm, whereas Madonna probably wouldn’t be that fussed as she doubtless doesn’t walk that often into town for a pint in the middle of winter. 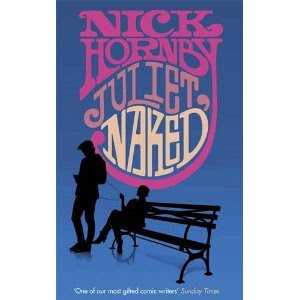 I like Hornby, particularly when he’s in ‘music fan’ mode. No one quite writes about the emotional attachment to music like Hornby does and he gets to let his imagination run wild with this one. He conjures up a whole career for his invented 1980’s American singer-songwriter Tucker Crowe. Crowe gets a complete set of albums with track listings, lyrics and accompanying tales, along with his own Wikipedia entries, fan sites and forums. So convincing was it that I almost found myself trying to track down a second hand copy of ‘Juliet’, his legendary break-up album from 1986, on ebay, just to find out what all the fuss was about because after ‘Juliet’, Crowe fell silent, stopped recording and became a recluse.

The story though is mainly about a couple, Annie and Duncan, who have been together almost as long as Crowe has been silent and Annie is well bored with the whole thing.

Then suddenly out of the blue Crowe’s record company releases ‘Juliet, Naked’, a CD of acoustic demos of all the songs from that legendary album. Duncan loves it and posts an ecstatic review on the internet. Annie hates it and posts a counter review. Perhaps as a consequence of this Annie gets kind of lucky when Duncan leaves her for someone else, very briefly, and then refuses to take him back as she starts getting her own life together. This includes hanging out with the man himself, Tucker Crowe, who gets in touch with her after he agrees with her review. Duncan can’t quite get his head around that.

In truth, not a lot happens in the book. It is three quarters of a good idea and then meanders a bit. I wondered how he was going to finish it but actually the ending is quite good.

By the evening, the rain is still impressive but then it has been practising all day. L says I won’t get Doggo to go out in it but its MD’s training tonight and although Doggo probably won’t get a go himself, he wouldn’t let us go unsupervised.

After that we do a late night raid on L’s work and nab an old desk for Daughter’s room. I believe we have permission and that it’s all kosher. Their new renovated offices look good, so good, that L reckons the rest of the staff will hate it when they come in tomorrow. Office politics, love em.