I’m on the bike again and although it’s not raining when I head in to work, naturally it is by the time I return later.

Son finally manages to pay for his university accommodation. He kept telling us they were rejecting his card and I think L was beginning to think the bank were bouncing the payment because he’d run out of money... but he says he’s sorted now. So at least we don't have to take him a tent. Although, knowing Son, he’d have fallen on his feet anyway. Someone would have taken him in, rent free and probably fed him as well. Probably the same person who’s lending him the different clothes we keep seeing him wearing on the Facebook photos.

L’s company is having a clear out of old furniture, so we have plenty of options for firewood for the bonfire we’re going to tonight, if only we could fit them in the car. Instead we have a car full of teenagers, Daughter and a couple of friends, and they probably won’t burn that well.

Tonight being Bonfire Night, or Guy Fawkes Night if you prefer, is the one night of the year when Doggo’s selective deafness doesn’t kick in. Instead he hides behind the settee while MD plays ball alone in the garden despite the constant shelling. Chalk and cheese those dogs.

It’s still raining. A nice night for a BBQ and fireworks. Not.

The bonfire, well one of those metal dustbin things that they use on picket lines, is at a friend’s house and we bring our ‘one large firework’ in accordance of the rules of the evening. Although it looks more like a suitcase bomb. 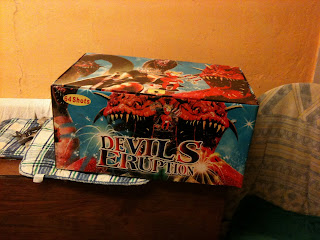 I find myself roped in to helping with the ‘display’. I had kind of hoped to take a back seat this year but to no avail but it all goes very well. Despite a firework ‘safety’ lighter that seems far from safe. It performs more like a Roman Candle and is far more impressive than the sparklers we have. Especially my sparklers, which refuse to sparkle at all.

My colleague in the pyrotechnics department starts with the fireworks right at the bottom of his garden but gradually they seem to inch closer to the house. A touch of artistic licence is in play and a desire to increase audience participation. Hmmm. When it comes to the suitcase I think it’s time to reverse the tide and head back away from the house.

Thankfully we all survive to ignite another day.