They’re got some snow in quite a few places this morning I see. Quite a bit in Yorkshire. That’s where I’m supposed to be on Saturday.

Daughter says she doesn't want to go to Uni anywhere where it snows. She won’t be going to study in Vienna or Zurich or Geneva or Colorado or anywhere like that then. Shame we would have visited.

At this rate she'll be staying in Nottingham, we’re still snow free or there's always Warwick I suppose. L checks the Warwick webcam in case we need to take a shovel when we go over there tonight. Nope, no snow in Warwick.

We’re in the salubrious surroundings of the Warwick Arts Theatre on Warwick University’s campus. Last time we were here was a few months ago and among the acts on the stage was the Principal of the University thanking us for leaving Son in his care for the next three years. Pleasure.

This means we get to visit the exiled one tonight. We offered to buy him a ticket but he declined. Too many parties to go to I guess. Whether he’ll have time to make us a drink before we come home I’m not sure, we'd need to take our own coffee and milk of course and perhaps we’ll take our usual flask as backup, just in case.

In the end we manage to spend half an hour or so to spend with him before the gig. Time enough for a quick coffee, a toastie and the lightening of the wallet by around £20 courtesy of the on campus Costa Coffee. Students too it seems are highly fleeceable.

Then we head into the Arts Centre which hasn’t been occupied by a student protest although apparently somewhere on campus has been. Son tells us the occupation ended peacefully when they withdrew toilet facilities from them. No staying power these modern students.

Support tonight’s comes from a band called Phosphorescent. The band is mainly a chap called Matthew Houck who performs with an ever changing group of musicians. 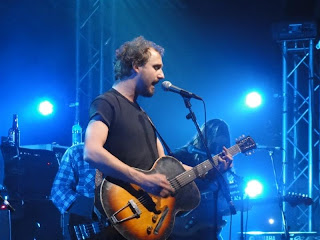 They were ok, worth a listen. In fact at first they were pretty impressive but they soon settled down and their alt-country/folk songs all became a bit samey, one paced. Houck himself has a strong, if slightly irritating voice and you can’t criticize his band for not giving their all because to a man they certainly did. In particular their keyboard player, whose face I never saw, but they were a blur of movement throughout. Their last track mixed things up a bit and started out a bit livelier before it too settling down into a similar comforting plod to the rest of their stuff. Probably just not my thing because they had plenty of admirers tonight.

Rewind to 2005 and my first trip to the Leeds Festival. It wasn't too big a wrench to desert the Queens Of The Stone Age on the main stage, not to my liking, to head to what was then the 'Carling Stage' for the breakthrough acts. A band from Brooklyn called The National were on there entertaining a small crowd. Warming up for the delights to come, mainly Saul Williams, Charlotte Hatherley and Ladytron... as I recall. I had been quite taken with some of the tracks on their second album, 2003's 'Sad Songs for Dirty Lovers' and at Leeds they were excellent. Playing a surprisingly up-tempo set which I later discovered was mainly drawn from their new album at that time 'Alligator'. That was five years ago.

Now two critically acclaimed albums later, 2007’s 'Boxer' and now 'High Violet', one of the albums of this year, they are playing venues such as the Warwick Arts Theatre and it’s far busier than the Carling tent was.

After an entry accompanied by Neil Young’s ‘On The Beach’, it’s with ‘Boxer’ they start and ‘Start A War’. Vocalist Matt Berninger stumbling around like a punk drunk fighter and telling the crowd off for whistling at him. He’s joking, I think, and all the band are in high spirits throughout the night, with the Dessner brothers, Aaron and Bryce on guitars, verbally sparring with Berninger between songs. The National are a very family friendly affair because completing the line up are another set of brothers, Scott and Bryan Devendorf. Bryan somehow smashing a cymbal during ‘Mistaken for Strangers’. 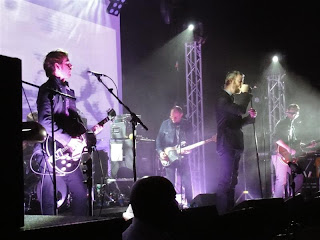 There’s also an additional two members touring with them, adding among other things trumpet and trombone to many tracks. Which are very evident on beefed up rendition of ‘Slow Show’, an often requested wedding song... so they tell us.

'High Violet' may be close on album of the year but it’s actually ‘Boxer’ that provides the most stand out moments tonight. The two I’ve just mentioned plus a very lively ‘Squalor Victoria’, a fantastic ‘Apartment Story’, what they describe as one of their many songs about social anxiety, and the closing ‘Fake Empire’.

They tell us a lot of stuff about their songs. ‘Afraid of Everyone’ is about how f***ed up American politics is. Whilst ‘Conversation 16’ turns out to be about marriage and not they say about cannibalism. I didn’t actually think it was...

They are excellent, if a tad too polished at times. What annoys most is that throughout the night they are fighting off requests for oldies. To be honest I didn’t expect much, if any, really old stuff because I didn’t think anyone would know it but the knowledgeable crowd tonight proved me wrong with their repeated requests. So why not give in and play some? They won’t. Claiming they have a set list to adhere to and anyway Berninger claims to not know the words... Then they do play ‘Available’ and a bit of ‘Cardinal Song’ off ‘Sad Songs for Dirty Lovers’ but it’s mainly a case of showcasing the quality of their last two releases. We get all but one of 'High Violet' and seven tracks from 'Boxer'. 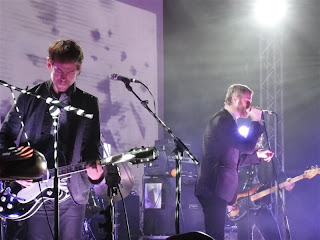 'Alligator' is only plundered twice, first for a corking ‘Abel’ with Berninger screaming the chorus down the microphone at us and then for ‘Mr November’ in the encore, when he does similar.

The highlight from the new album for me is the utter misery that is ‘Sorrow’. Love it. 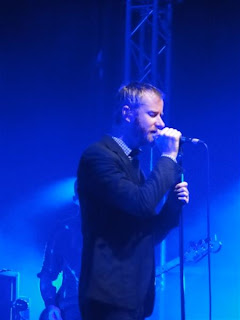 Finally they give into a request and say they will break band protocol for a guy near the front and insert a song into the set. It’s the excellent ‘Green Gloves’ but hardly an oldie and it’s not inserted, as it replaces a much older track ‘Lucky You’ from the ‘Sad Songs’ era, which is criminally binned.

Berninger croons his way through ‘Runaway’ to start the encore before fierce versions of ‘Mr. November’ and ‘Terrible Love’. They close though with an epic, attention grabbing, totally unplugged version of ‘Vanderlyle Crybaby Geeks’. Which was just superb.

Aaron Dessner and Berninger start the song stood on speaker stacks close to the crowd before Berninger journeys deeper into the throng, standing on the crash barrier being held up by a fan and leading the audience in an acoustic sing-along. Terrific stuff. 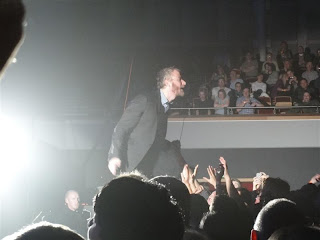