Wikipedia At The Ready

The knee seems to be knitting back together after too much ball kicking yesterday, well until I engage in another bout of said ball kicking on the park this morning and have a relapse. The boys don’t seem to notice.

The afternoon is spent bed shopping for Daughter and then the evening...

L, Daughter and I have booked tickets for Harry Potter 17 tonight or is it Harry Potter 7? I’m not sure, I lost track at number three. Apparently though this is the last book, so it’s the last film... though actually it’s not because they’re releasing another one next year. Confused.com? I am but that’s my usual state with Mr P. Still I’m willing to give this one a go, if only to complete (or, as it turns out, nearly complete the set).

The cinema is packed but no one complains about the click-click of Daughter’s knitting needles or the endless stream of pilgrimages to the toilet, which seems higher than usual tonight. Is it boring some people? Or have they not read the books and have simply gone to Google 'Regulus Arcturus Black' and the like, on the sly? Some folk are less underhand and openly have Wikipedia open and running on their smartphone (that's me) in an effort to keep up with the plot.

The headmaster of Hogwarts, Albus Dumbledore, is dead. On the surface that should not matter much to our now ex-students who have taken a year out, presumably at the taxpayers’ expense and are bumming their way round the UK. Yep, rather than go interrailing like normal teenagers, they have gone off on foot with a tent they found at the bottom of Hermione’s handbag.

Hermione is the first woman on earth ever to pull something useful out of her handbag. She also has a complete wardrobe in there, not only for herself but for Harry and Ron as well, presumably right down to their underwear. Though this isn’t confirmed. Of course the boys would have happily worn the same outfit throughout, so the clothes weren’t essential but the tent, yeah, that was useful. Welcome to Harry Potter - The Road Movie.

I’m getting ahead of myself though. Their trek has a purpose. Voldemort has installed a new regime at the Ministry of Magic, no coalitions there, this is an outright takeover and they’re painting Harry as a wizard with a price on his head, complete with stylish ‘wanted’ posters. When Bill Nighy tells you ‘these are dark times’, you better believe it.

Hermione waves her wand and erases herself from the photos on her parent’s mantelpiece. A move that isn’t just teenage vanity. She completely wipes herself from their memory, so that she can join Harry as he’s escorted from Privet Drive by his allies, dressed up as at least half a dozen decoy Harry Potters. 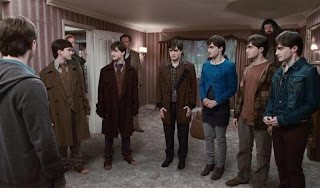 Yet they are met with an attack from the Death Eaters. Hagrid drives their air born motorcycle and sidecar the wrong way up the Dartford Tunnel in an attempt to lose them. Use the bridge Robbie it’s far quicker.

The safety of the Weasleys’ Burrow is achieved but at the cost of Mad-Eye Moody and that owl thing (Hedwig?) which bites the dust early doors. Then what do they do? Lie low? Nope. They hold a wedding there, which predictably also comes under attack. From which the three escape and set off on their camping trip across the English countryside in the absence of any form of coherent plan.

Harry’s mission is still to find and destroy the remaining horcruxes that contain fragments of Voldemort's soul. Harry accompanied by his trusty sidekicks infiltrate the Ministry of Magic to steal one of the horcruxes which is in the form of a locket. By the way, to gain entry to the ministry you have to flush yourself down the toilet. All grown up stuff this.

Having achieved this they find the locket to be indestructible and take turns in wearing it to dilute its powers, as whoever wears it experiences deeply negative thoughts.

At this point the film starts to feel very unlike a Harry Potter movie and a world away from the first film which was undoubtedly a kid’s film. The pace is slower in this film, perhaps too slow for some. They’re not veering off on some subplot every five minutes and making the whole thing feel cluttered. There’s also less time devoted to the special effects, though it has its moments. The music is also less intrusive, the more senior actors and actresses are kept mostly on the sidelines and there’s less overall action, which means less for the kids to enjoy I suppose. It's a more mature, much less cheesy and dare I even say grittier film. This is not your everyday blockbuster and it’s all the better for it. 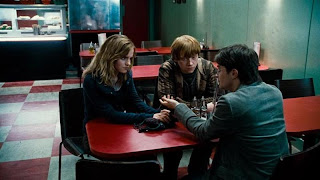 There’s plenty of air in this film, space that could easily have been compressed to make the two parts into one but it is kind of good that they haven't and not just for their bank balances. By doing this they have succeeded in making a film that mere muggles like I can follow.

For the first time a Harry Potter film is character driven. It's a film about the friendship between its three principal figures, who, to be honest, all act their socks off. Any notion that they ditched the 3D version in case Daniel Radcliffe was exposed as a cardboard cut-out can be dispensed with.

The film takes a few risks, gets emotional and is at times as moody as its teenage cast. Full of long silences, meaningful glances and tension that you could cut with a blunt wand. 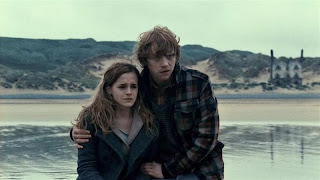 They all throw their toys out of the pram at one point or another of course. Ron reckons Hermione has fluttered her eyelids at Harry once too often and storms off in a huff. Bad call mate. Whilst he’s gone, left alone in the tent together, feeling all sad, lonely and disillusioned, the pair bond and cheer each other up, by dancing to Nick Cave and The Bad Seeds who are playing on the radio. For a moment Harry seems to contemplate renegotiating their ‘just good friends’ contract but if he did, they cut that bit out.

Still the pair of them pitch camp atop Malham Cove. Which is a nice romantic spot, when it isn’t raining or when there aren’t Death Eaters after you, just don’t tell the National Trust. 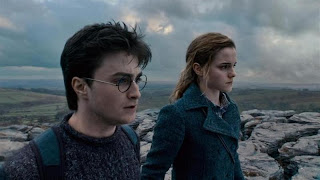 Though they didn't even pop down to the Buck Inn for an Old Peculiar and that's just not realistic but then again, if this is fantasy, perhaps it's not supposed to be.

Then comes the most ‘chilling’ moment of the whole film. I could actually see L shaking next to me as Harry strips off to dive through the ice to retrieve the sword of Gryffindor. Brrr. That must have been cold, particularly as the locket tried to drown him. Ron’s reappearance rescues him and then when it falls to Ron to finally destroy the locket with the sword, ‘poor’ Harry’s naked again. Though this time he’s being warmed by an equally naked Hermione. The locket is playing on Ron’s paranoia and throwing up a hallucination (unless someone filmed them on their mobile) of Harry enjoying a prolonged rally of tongue tennis with a topless Hermione, who’s been kinkily sprayed silver. That’s one for the Emma Watson aficionados.

If that was racy then the return of Dobby was, well, sad. 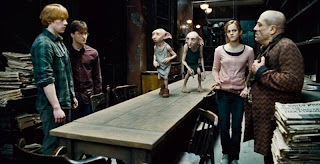 His last ever scene was possibly the most poignant ever performed by a CGI elf, and I ask is one allowed to get misty eyed over such matters? Hope so.

Then there was the excellent animated sequence about the origins of the Deathly Hallows, which was very clever and the ending... well I can't really spoil that for you because this ones to be continued.

Overall I didn't have great expectations but I was pleasantly surprised with the latest from Mr P. I might even be coerced into the next one.