On the bike today and rather bizarrely I get shouted out by a chap who had not only parked his car in the cycle lane in Risley but then got out of the car without looking. I have to swerve to avoid colliding with him.... and he shouts at me! He was a huge chap, well overweight, he could have done with doing a bit of cycling himself but I think probably even walking would have been beyond him. I probably burned more calories in that swerve than he will do in the rest of the week.

This morning L asks whether she’s got life insurance. She has but does the fact she’s enquiring mean she's more ill that I thought?

It’s the tuition fees demonstration in London today. Son was on about hitching a lift on the coach to blag a day out in London. Though I can’t see the NUS letting him get away with that. All the same I look out for him on the BBC news. No sign. Turns out he stayed in Warwick. He’s well out of it.

Can’t believe this photo from the BBC website. Talk about staged. All those cameramen just happened to be there when that lad kicked a window in... 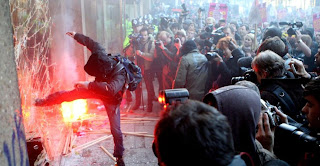 I cycle to the pool for a swim. I think that’s three weeks in a row. When I arrive I text L ‘Alive. At pool’, as I usually do to confirm that I’ve survived another battle with the traffic. Her response ‘Almost dead. At work’ isn’t encouraging but quite witty. Hope I don’t need to resuscitate her later with Leffe.

It’s Doggo’s late training session tonight. His one evening a month when he gets the training all to himself. MD isn’t happy though and sits there looking a bit pathetic in the car. He does that very well.