What Have I Let Myself In For?

With our scheduled race at Edwinstowe cancelled we brave the snow which after yesterdays rain has now mainly turned to sheet ice, to travel over to Stoke or more precisely Newcastle under Lyme for this morning Newcastle Dales Dash 10k. There are no ‘dales’ in Newcastle under Lyme by the way. ‘Dales’ is the name of the organiser.

We’re in the Apedale Valley area of Chesterton for the seventh running of the 10k which is an off road race within Apedale Community Country Park which is on the site of an old mine. Past years apparently have been very very muddy. No chance of that this year, the ground is frozen solid.

We park up and skate up the road to registration. Oh dear. What have I let myself in for? I hope it really is all off road and there aren’t any stretches of iced up tarmac like this to negotiate.

The start is actually on the road, so I take the first stretch easy before we enter the park itself and up the first of many inclines. I would describe the route as undulating. That's putting it mildly. This was no jog in the park. 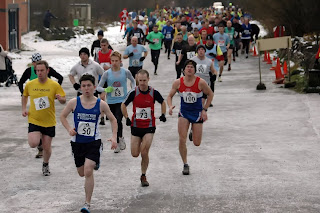 Actually I take the whole thing easy, not worth breaking my neck for a fast time. Despite people with ponytails and/or zimmer frames passing me. This would not be a PB friendly course in any weather.

I have to give the organisers credit for putting this race on. We needed a run and they provided it, with (sleigh) bells on. I love the snow but it’s just been too icy to run or cycle. I've even seriously considered going to the gym. Only considered mind. So far. 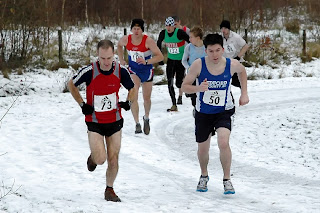 There was snow and ice everywhere but it was generally grippy enough even in the normal trainers that I wore. Where the ice was too bad there were marshals making sure you stayed away from the worse bits.

The final stretch was back along the entrance road, which had defrosted a bit by then. Unfortunately we had to run past our car which meant Doggo cheered me nosily all the way along the home straight. I could hear MD joining in, although he was in his ‘box’ and couldn’t see what he was barking at, not that that seems to deter him.

All in all a friendly race, a challenging course, hilly but rewarding and not a bad T-shirt at the end. Although they did run out of the smaller sizes much to L’s frustration. 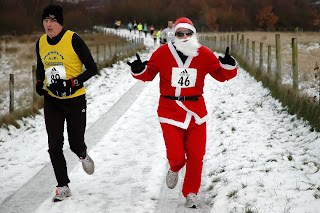 My time was awful, over 48 minutes, but I blame the conditions and I’ve no idea if the course was an accurate 10k or not. I suspect it was long and there weren’t any mile or km markers to break it down. The absence of which would have really annoyed me had I been after a decent time.

Afterwards I warm myself up with coffee in the car whilst L goes in search of something to accompany it and returns with two huge chunks of chocolate cake.

Then we head home where after quickly dropping L off I head back out to the dog club AGM. I have agreed to go on the committee next year, for my sins. I may be regretting it already as there was a three way argument between two existing committee members and a third who wished to rejoin. A very juvenile 'I can’t work with them' argument ensued. Children please. What have I let myself in for?