That Must Have Been Some Road

With no race to do we spend the day walking. We had contemplated going to the start anyway where one of the organisers was giving out minced pies and mulled wine to all those that turn up. As these will have been bought with the race in mind I imagine he has quite a lot to give away and perhaps we should be helping him dispose of them.

In the end though we decide to explore where we are rather than return to an area we know very well. So we set off on a walk and follow the track up towards ‘High Street’. Which at 828 metres is the highest point at this end of the Lake District. It is named after the Roman road which ran from Penrith to Ambleside and bizarrely went over the summit. That must have been some road. Apparently it was easier and safer that hacking through the woodland in the valley. 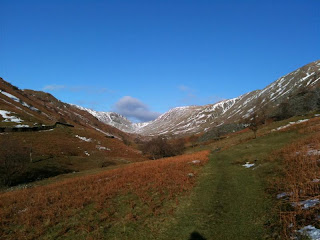 We don’t intend going all the way to the summit and turn back once the path starts getting too icy to navigate. We need a dinky pair of spikes like the ones we saw one walker with. 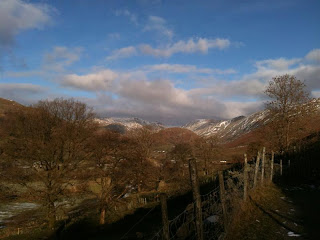 So we return to Troutbeck via the Kirkstone Pass which was built the way the Roman’s refused to go and stop off for a jar at the Queens Head, a luxury not available to those road building Romans. 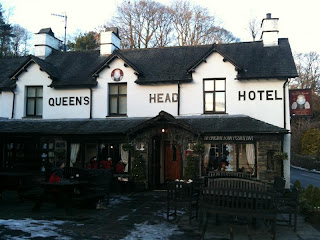 Robinson’s Old Tom on draft, you don’t see that very often. Like never. 8.5% and deadly stuff.

L has two! Halves I hasten to add. Thankfully it’s only a short stagger from there back to base camp.