Time For An ‘Enduring Classic’

I think we are one of only a few companies open today, which is reinforced by the fact that lunch doesn’t turn up. Luckily we finish at 12.30 and I head into Derby to meet L. As its Christmas Eve, watching a film set on Christmas Eve seems just so appropriate.

It’s a Wonderful Life was originally released in 1946 and now has one of those tags as an ‘enduring classic’. It was nominated for five Academy Awards but won none in a year the board was swept by `The Best Years of Our Lives'.

I guess I must have seen it at some point, my Mother has always watched these sort of things, so I guess I must have experienced at least parts of it but it doesn’t seem that familiar when we take in the 1pm showing at Derby’s Quad Cinema.

George Bailey (James Stewart) is a man with big ideas. He wants to leave his home town of Bedford Falls, go to college, travel the world and make something of his life but it never happens for him. Life throws up situation after situation for George but each time he puts others and the well being of his town before himself. Which means that he ends up never leaving the town. 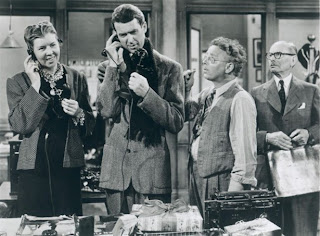 The bonus here should be that he is stalked, albeit laid back 1940’s style stalking, by the lovely Mary (Donna Reed). Frolicking naked in a bush, we know your game Mary. That was no accident was it? George proves to be a hard man to snare but Mary is a patient girl who waits around for the penny to drop and for George to realize that he loves her. 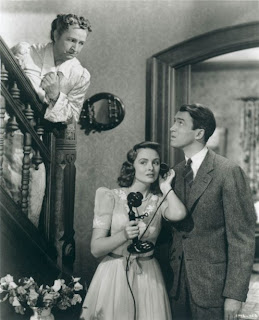 The film tells us all this in flashback because George has had enough of being a failure and is ready to end his miserable life by throwing himself off a bridge and would have done so if it hadn’t been for Angel Second Class Clarence (Henry Travers), a man yet to win his angel wings, who is sent to save him.

First though Clarence is given the story of George Bailey's life which is how we find out that as a child George saved his brother’s life, a brother who went on to be a war hero and he also persuaded his chemist boss Mr Gower that he had unwittingly prescribed poison to a child. Then when he was older and his father died he took on his father’s loans business. It was his father’s dream to build affordable houses despite the greedy Mr Potter's (Lionel Barrymore) influence on the town and the loan company being probably the only business that Potter doesn’t own. There follows many situation where George puts the town folk or his family before himself.

Then on Christmas Eve, George's absent-minded Uncle Billy (Thomas Mitchell) misplaces a large sum of the business’s money. Potter finds the money and keeps it. George realizes that he will be held responsible and probably jailed, finally allowing Potter to take control of his company. 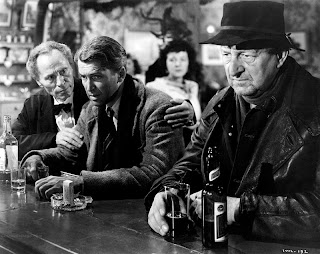 After arguing with his wife and family, George gets drunk at a local bar and comes to the conclusion that he should never have been born. Broken and suicidal he heads for the bridge, where Clarence’s grants him his wish. Clarence shows George what life would have been like had he never existed and what would have became of the people he knew. It’s a nightmarish vision of Pottersville, a town mired in sleaze where all George’s friends and family are either dead, ruined, or miserable. Most horrific of all Mary has become a librarian and a spinster.

The film appears to say that we are all inextricably linked to each other’s lives and we each play an important part in one another's existence. True but not necessarily to the good. George was one in a million. No one else in the town had the back bone to stand up to Potter and as for Potter. What would have been Clarence’s spiel had it been Potter on that bridge? Or would he have even bothered getting out of bed for that one. Erasing his existence would have had a positive effect on everyone or at least you would think.

Perhaps the true message is one of sacrifice for the greater good. George sees the influence he’s had on friends and family and finally realises just what a wonderful life he's really had. He is restored to the present, gets down off the bridge and goes home. Where everyone is dredging up their life savings to raise the money to save George. It’s all heart warming stuff. Even I was a bit touched.

Of course theft is theft and George would be jailed anyway, as Potter never does seem to get his comeuppance, but that just wouldn't be Christmas.

After which we don't make the same mistake as last year by trying to spend the evening in town. That sort of Christmas Eve no longer exists, unfortunately.

We stay in Derby and at the Silk Milk, it’s packed and it’s staying open until 11pm. Not that that’s much good to us, the last bus home is 6.50 which we have to make sure we’re on.