I take the dogs on the park this morning for a frolic through the virgin snow. Well it’s not actually much of a frolic; it’s a bit heavy going for a game of football. It wears me out more than the dogs.

Meanwhile L is down at our post office depot picking up a parcel and she is stunned when they hand her a pile of our post, which they hadn’t been delivering. We hadn’t noticed they hadn’t delivered, because our deliveries are terribly hit and miss anyway but if the post has reached the depot, why aren’t they delivering it? We’ve not had much snow at all in Nottingham; even most of the schools are open and postmen deliver on foot, so the snow’s not going to bother them is it.

Then as I get the bus over to Derby for the match it starts to rain. Great. The typical British winter has arrived at last. Well at least that'll shut the moaners, who don’t like the snow, up. However, looking at the forecast I'm hopeful the nice white stuff will be back with us soon.

I get the same bus driver who went the wrong way the other week and he does it again. Unbelievable. We sit in traffic getting nowhere. At 2.30 I attempt to jump off explaining that I would like to be at the match for kick off at 3.00 and at the rate he’s moving (or not moving) we won’t even be in the bus station by then. Reluctantly he lets me off.

Derby’s bubble has somewhat burst and they are totally outplayed by Norwich City, losing 2-1. I’m actually happy with that. I don’t want us to flirt with promotion this season.

Afterwards L drives over and we head over to Wolverhampton for a bit of an 80’s night. The Human League at the Civic Hall.

Support comes from ‘(We Are) Performance’, a three piece from Manchester, who make a great sound. Although I keep looking around for their fourth member, the one who is bashing out all the amazing synth tunes. This is because they consist only of a suave looking singer, who’s good; a girl with a guitar who only strums about three notes (not that that’s a criticism, many a successful career has been founded on less) and an electronics whizz complete his MacBook but even he only seems to play a few electric drum gadgets. That's it. Music is so easy-peasy. When you have it all taped or sequenced. 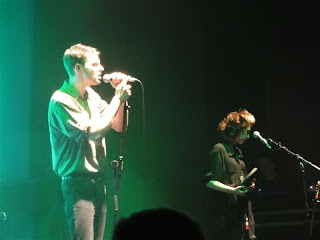 Still, as I said, they’re very good, well they sound good. They’re also very in keeping with The Human League, who have pulled a sizeable crowd tonight. Rather worryingly though, I might be the youngest one here. Possibly. The combined age of the front row is terrifying. No crowd surfing please gents, not with those walking sticks.

The League take the stage and open with a new track from their forthcoming album ‘Credo’. The track ‘Electric Shock’ seems very well received. Perhaps it’s the hooded monk on vocals that swings it for them. Then the monk removes his hood and blimey, it’s Phil Oakey. The winner of the prize for the most dubious outfit worn on stage at a Human League gig and it’s not an easy one to win, competition is fierce. 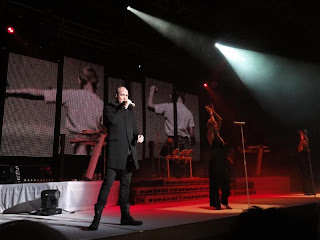 Then we’re straight into a run of classics. I can happily report that Phil still can’t hit those high notes in ‘Open Your Heart’ but he never has been able to and it's never bothered him or us. ‘Mirror Man’ follows and then ‘Heart Like A Wheel’ introduced as one of former member Jo Callis’s anti-war songs and that is aptly followed by something in a similar refrain, ‘The Lebanon’. Which brings their frustrated guitarist, Nic Burke, to the fore. It’s good to see he’s still with them and hasn't jumped ship to AC-DC, where I think possibly his heart lies.

As the hits keep coming, ‘Louise’ followed by a couple from Dare, ‘Love Action’ and ‘Sound Of The Crowd’, it’s all very good but I do feel a bit duped. I was intrigued to come because this tour was supposed to be in support of their new album but that is not now out until March. So again tonight we generally get a greatest hits set, which is obviously what the masses want to hear but I wanted to hear what they’d been up to in the studio. Their last album ‘Secrets’ was very good indeed and hugely underrated. 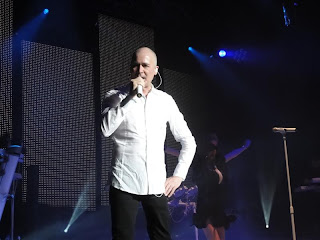 Then came two old oldies. No disrespect to the girls, who went for a breather at this point (we're all getting to that sort of age), but ‘Being Boiled’ was absolutely ace, it sounded great and had the best light show of the night. ‘Empire State Human’, which followed, wasn’t too far behind either, with Phil playing a guitar strap keyboard. 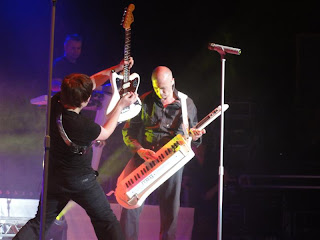 The girls returned after a wardrobe change for the new single ‘Night People’ with its incredibly cheesy lyrics. The song isn’t bad but it seemed a lot of the crowd were perplexed by it and what it was doing ruining their night of nostalgia. 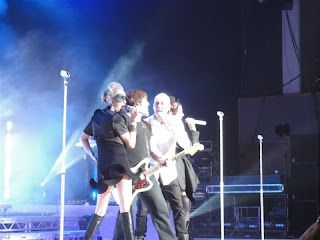 ‘Seconds’ was a bit of a surprise as the encore with Phil back in monk mode and again no girls. It was also stupendously good. No offence girls. Then they’re back, with another outfit for the closing ‘cover’ of ‘Together In Electric Dreams’.

All good stuff. I would have preferred to hear more songs from ‘Credo’, but that would have upset the masses. Maybe next time.