We head over to Warwick (Coventry) to rescue Son from the purgatory that has been his first term at University. Non-stop partying, must have been hell. It seems like he’s only been there five minutes and compared with some of his mates, he has. His course started a week later and finished a week earlier than most.

The University wants them all out by 10am and when we arrive there just after 9am there are SWAT teams of cleaners, armed to the teeth with industrial strength solutions, waiting to swoop. Son, surprisingly, is up, ready and packed. Although looking very bleary eyed, perhaps he’s not actually been to bed yet.

We drop him back at home, where he crawls up the stairs and into bed. It’s already like he’s never been away. Then we start packing and prepare to head up to the Lakes for the rest of the weekend.

The drive up the M6 is uneventful, which is good and there is no snow anywhere, which is sad. I think we have one of the few surviving patches in our own garden. The first snow we see is on the Lakeland fells and as leave the M6, there is also some still in the fields. Very festive.

We negotiate the narrow lakes to Troutbeck which is a new destination for us and find our accommodation for the weekend, the ‘Mortal Man’. 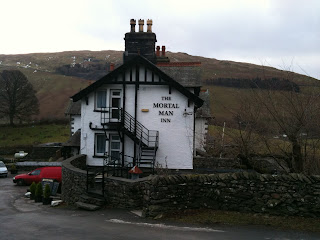 The ‘Mortal Man’ is a traditional inn dating back to 1689, with apparently a short break a few years ago when the then owner tried to rebrand it as some sort of cocktail bar. The current owners, who have been there for about eighteen months, have turned it back into a very charming inn.

The first thing you notice is its striking pub sign, 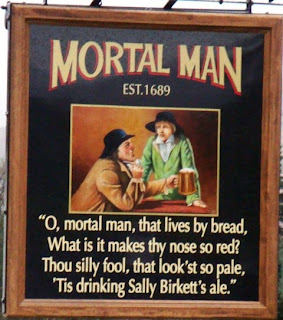 which carries the rhyme:-

"Thou mortal man that lives by bread
What is it that makes thy nose so red?
Thou silly fool that lookst so pale,
'Tis drinking Sally Birkett's ale."

At the time the original sign was painted, the landlord was a chap called Tommy Birkett and Sally was presumably his other half. 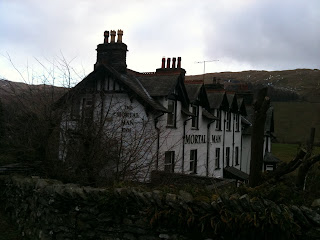 So naturally one of the first things we do after checking in is to head down to the bar, settle in front of the real log fire, reprimand MD for barking at a fellow canine guest and sample Sally's ale, which is actually a bitter from the Hawkshead Brewery and it’s pleasant enough. As is the Jennings’ Cumberland Ale which is alongside it on the bar. The third of their ales is Timothy Taylor’s Landlord which I don’t try, although I have nothing against it, because it isn’t from Cumbria. So I don’t see the point when you can support the local ales on the bar.

Then we hit the food, which too is very good and they have a cheeseboard, so bonus points for that.