No Complaints From Me About The Weather

My bus is on time again, the roads are clear and there's hardly any traffic about so I arrive at work earlier than usual! The added bonus is that all the women on my bus who are usually in power suits are now donning woolly black stockings and walking boots. Which is far sexier. I have no complaints about this Arctic weather at all. 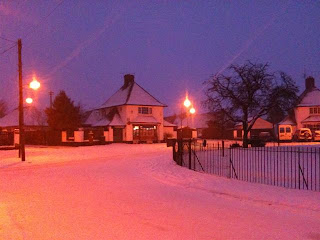 I think L is getting a bit fed up with our wimpy dog. Collies are supposed to be outdoor beasts, used to combing the hills in all weathers looking for lost sheep. Ours prefer a comfy duvet and a hot water bottle.

Doggo has had a bit of a rough time of it these past few mornings. L’s had to repeatedly defrost his paws. MD doesn’t have the same problem as his paws barely touch the ground when he's out walking. Yesterday a load of snow slid off the lid of one of the wheelie bins on the park and unfortunately onto Doggo's head. He was absolutely mortified. You would have thought he would have shaken it off, but no, he just sat there petrified and had to be revived with a full body rub down. Tempted to try that one myself.

She vows she’s not walking him again unless he wears socks and perhaps gets a coat for Christmas. This is a bit of a turnaround, it’s usually MD she swears she’s not ever walking again.

Apparently the old man even helped himself to a bundle of socks off the bedroom radiator, so perhaps that’s a hint... or perhaps he just wanted to play.

I can’t imagine getting him into a coat. He’d be petrified. He’d think we were trying to murder him or something.

It’s been gently flaking down with snow all day long and I quite fancied a lunch time stroll and a pint but my colleague declined to venture out. Personally I thought it was a good opportunity for a long liquid lunch.

L's suggested technique for getting home is to sit at the top of Ilkeston Road and simply slide home down the hill. Which sounds great, I might get the bus straight into Nottingham and join her.

At work, we’re all kind of gripped, in a morbid expecting the inevitable defeat sort of way, to the World Cup bid decision. The verdict comes forty minutes late after the stuffing of twenty pound notes into brown envelopes took longer than expected.

Latest score. 1-0 to the Mafia. Which continues FIFA policy of taking the tournament around the world's most dangerous countries. This year South Africa, four years time Brazil and now Russia. I wonder if Afghanistan will bid for 2026.

So everyone else has wasted a lot of money bidding for these two cups and they’ve simply gone where the head of FIFA wanted them to go. If the strategy is to take the cup to countries that don’t have any stadiums, infrastructure or much of a football tradition then they should just say so. Then countries with everything already in place like England and Spain won’t waste their time and money bidding.

I’m not totally opposed to Russia getting it, they do after all like their football there and they do usually qualify for the tournament, which should be a condition of bidding in my opinion, but really they should have been given a smaller tournament first, such as the Euros. Qatar though is just an out and out joke.

Squash tonight is interesting. I lose 3-2 which means my opponent is well unhappy but not as unhappy as his racquet. 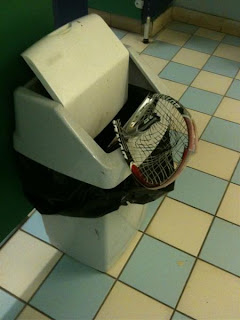