The trip up to Glencoe takes seven hours (again) and is as good as it gets really. No hold ups and once you get to the Lake District its pleasant views all the way, well apart from Glasgow obviously but you can close your eyes for that bit. We had a brief stop which almost blighted the whole trip when some chap tried to park his car on top of the dogs, who were having their lunch. Ok, so perhaps we shouldn't have been feeding the dogs in Tesco’s car park but that's no reason for him to try and park on top of us when half the car park was free. These places all have baby changing facilities etc etc but dog feeding zones? No I don’t think so.

As we arrive the thermometer descends to -5 at times and there’s snow on the ground in the village but not a lot. The mountains though look loaded. Back home, in my absence Derby lose whilst in Vancouver Amy Williams lands Winter Olympic gold in the skeleton bobsleigh.

Sunday. It snows! In Nottingham. Typical. That’s not supposed to happen. It's supposed to be snowing up here. That's why we came. To exercise the dogs and us, we go for a run (what else). 9.2 miles in the snowy valley below Ben Nevis. Very picturesque. Although I didn't expect the valley to be so relentlessly uphill, even on the way back or was that just my imagination? Then just for good measure we run the 2.5 miles to the pub, where the dogs (both of them) are threatened with expulsion for being gobby. Running back probably wasn't such a good idea after four pints and chilli n chips. It was a good job I skipped dessert. 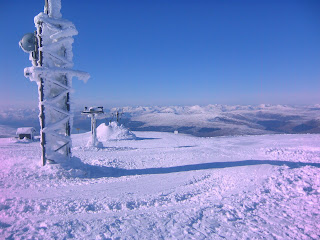 The next day we ski at Nevis Range, where there’s tons of snow. All the ski runs are open, it’s sunny and there’s no wind. It’s just so unlike Scotland. Give me a Weizen Bier or a Gluhwein and it could be Austria. I could have skied my favourite run, Warrens, forever. Then I attempted the Nid Wall (a black), totally unpisted and full of holes due to hill walker’s size eleven boots. In fact I had to slalom down through the descending walkers, around twenty of them. It was memorable but only because it was hard work. Glad I did it but I soon return to my mate Warren. 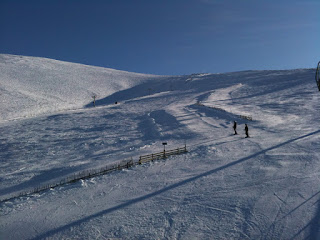 We checked out the finally reopened (after over three years) and now refurbished Glencoe Hotel. Nice but their only beer is Deuchars. The only Scottish beer you can get everywhere in England. Not an inspired choice and an opportunity missed. The whiskeys were cheap though.

We are alternating ski days and dog days, so on Tuesday we run again. This time along the Caledonian Canal from a place called Caol where Neptune's Staircase is, that’s a series of locks, to Moy Bridge, a swing bridge. The route is known as the Great Glen Way. It goes all the way to Inverness, I think. Fun was had by all. Particularly MD who got to bark at sheep, cows and the odd cat. Even the cats up here are ganging up on him. I think the Nottingham feline fraternity must have passed the word on, that he’s so easy to wind up.

The weather forecasts can't seem to agree whether the current nice sunny weather is going to last or not. The BBC forecasts that the Nottingham snow is heading our way but there’s no sign of it as I go to bed on Tuesday night. So I contemplate making the eighty mile drive over to Cairngorm on Wednesday, to sample the once in a decade conditions but...

As I pull back the curtains on Wednesday morning, suddenly all plans are put on hold. The snow has arrived. Nil visibility persuades us not to ski at all. The dogs love the alternative, a walk in a blizzard and the fresh snow. MD loves it so much he shins up a mountain to say hello to a few wild deer. Then gets severely reprimanded when he rejoins us. 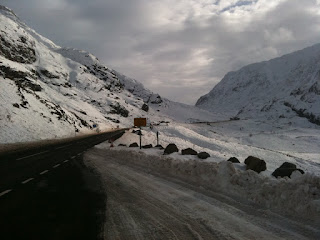 The forecast says today's snow is just for starters before the deluge due tomorrow. So perhaps we best batten down the hatches in the Clachaig Inn with the wonderful Black Gold, a beer teasingly produced by a brewery named after the unattainable Cairngorm. We bravely wade through the falling snow to the pub. Intrepid or what. Certainly less hazardous than driving given the conditions. Using the skis might have been an option though.

The next morning it's still snowing. I decide to stay in bed until lunchtime with Cycling Weekly and L for entertainment. We’re snowed in. The news says that the A82 main road up to Glencoe is shut. So we’re cut off and in more ways than one, we also seem to have lost mobile reception. So Daughter can't have her morning alarm call.

We walk to the road and yes sure enough the snow gates are shut and a lorry is parked across it, making sure no one passes. In the village it's milder now and raining but higher up on the A82 past the Three Sisters and the ski lifts it's still snowing. So another day walking the dogs and chilling out. I’ve even finished the Sunday paper by Thursday, now there's a first. 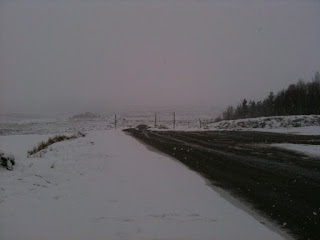 Things improve enough later for us to battle against the elements and the road conditions to get to Fort William for a curry and a pint in the Grog n Gruel. They have mobile reception up there. So at least we can tell people we’re still alive and to find out how late Daughter was for college. 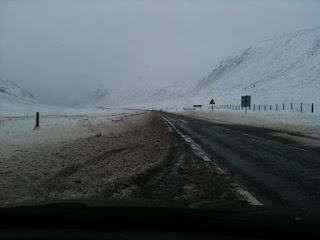 By Friday, the snow has stopped although weather reports say Nevis Range is stormbound. Glencoe mountain though is apparently open. We give it a go. They've had a ridiculous amount of snow and it was too deep really but good fun anyway. Waist deep drifts. Totally un-skiable especially on blades but we’ve left our proper skis back at the cottage. At least I can now say that I've skied/slithered/staggered/fell/waded all the way down to the car park. There's never been enough snow to do this before. It wasn’t elegant but at least I’ve done it. L celebrates surviving the car park run by getting addicted to Grozet (Gooseberry ale) in the pub.

By Saturday and home time, all the roads are open again. Although the guy at the petrol station advises us to head south whilst the going is good, as the strong winds are drifting the snow back across the road. We make our escape and make it all the way home, again in around seven hours. The trip is even prettier on the way back; the snow went all the way down to Glasgow and then reappeared again, in the Pennines and the Lake District.

Back home, we assess the damage that two teenagers can wreak left to their own devices in a house for a week. Although we had a fair idea because Daughter had been sending us preview photos.
Posted by FitForNothing at 4:01 PM