Last Friday, the day before we went up to Scotland, we were over in Leicester at the Musician to see Los Campesinos!

First on stage though were a band called Islet but band is perhaps the wrong word. They’re a three piece which included Emma from Victorian English Gentleman's Club, who were always a bit weird but not this weird. Islet are more of an experience than a band. They leap around the stage, swapping instruments and spewing forth (there is perhaps no better way to describe it) their unique sound. It’s chaotic, it’s noisy, it’s different, it’s drama. It’s so very L’s sort of thing. Their instruments are not so much played, as chucked in to a blender to see what comes out the other end. They utilise them in ways you just wouldn’t think of. There are drums, guitars, keyboards but there’s also stuff like maracas and tambourines, sometimes played, sometimes flung into the crowd. In fact most of the band disappear off into the crowd on a regular basis and for all we know they’re buying a pint at the bar as they emit their vocal screams, yelps, etc. 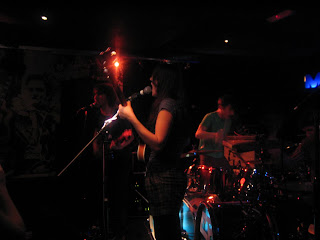 They use two drum kits at one point, one borrowed it seems from the next band up, Swanton Bombs. When one of them decides to stand on one of the drum kits before hurling himself off the top of it, it’s good to see that it's their own and not the one they’ve borrowed.

If like I, you think all this sounds intriguing then you might want to look them up on the internet. Good luck. They’re not into websites ‘n’ stuff or so it seems, for that matter, releasing records. Even the info they hand out at the gig tells you nothing. Unique indeed. You may not find them anywhere other than live, so go see for yourself.

Much more conventional are Swanton Bombs. So conventional in fact that the stage seems bare once all Islet’s stuff has been removed and we are left with just a drum kit and a guitar. So it’s the White Stripes approach then but although they try hard and come smartly dressed in their prom suits, it simply doesn’t do anything for me.

They seem confused about how to follow Islet and also not sure whether they should make fun of them or compliment them. Sandwiched between two bands from Cardiff and two fairly unique ones at that, they are sunk really before they start but to be honest they don’t rise to the task much either. 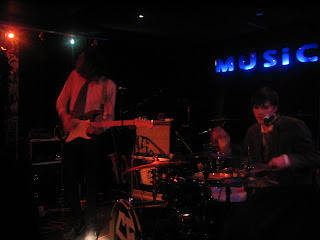 Their simple manifesto is... Guitar, play it loud. Drums, play them loud. Vocals... well loud but perhaps the vocals are the problem. The drummer is good and the guitar riffs have their moments but vocalist Dominic just can’t hit the notes. He’s so out of tune, that sometimes it’s painful. He might have got away with this if the tunes had been more memorable but mostly they're not. I’m sure there’s something there, well there’s energy and commitment, but as for satisfaction, tonight I’m not getting any.

So to our headliners. The first question is how the hell they are going to fit all seven of them onto the tiny stage. It is seven at the moment isn't it? No tonight it’s eight. This venue is far too small for them. Both for the band and for the crowd who need much more room to seeth around. As is demonstrated when long standing favourite ‘Death To Los Campesinos!’ kicks in early, after two new tracks open the set. The so brief, you’ll almost miss it, ‘Heart Swells/100-1’ and the delightful ‘I Sighed. I Just Sighed. Just So You know’. Yes we like long titles here, get used to it, they get longer. 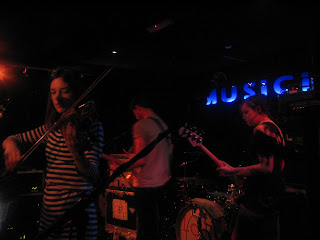 Once it gets hectic, and after the minor riot caused by 'Death', lead singer Gareth pleads for the safety of the little people at the front. We’re quite thankful for the amplifier that Islet dumped in the middle of the floor because it acts as a buffer from the mosh. There appears to be no back stage area at the Musician, only a side stage area and it isn’t anywhere near big enough for three bands, certainly not when your headliners have enough members to almost fill a football team. Several times pieces of Islet’s gear got stacked on my foot. I’m even asked to assist them packing up at one stage. Well... I hold a box open for them. Yep, I too could be a roadie.

Each of Los Campesinos! songs are as exhausting to listen to as they are for the crowd to dance to but I expected a lively performance and we certainly got one. Each song of theirs is packed full of contrasting musical ideas, conventional Swanton Bombs stuff like drums and guitar but with added glockenspiel, flute and the lovely Harriet stood right in front of me playing violin. Then of course it’s all topped off with Gareth's wonderful way with words. Sometimes it all seems to descend into chaos and it’s actually exhausting simply watching it all happening. 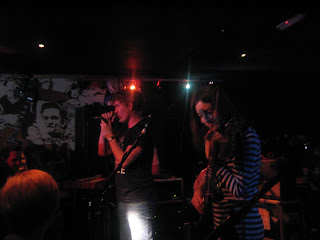 ‘Miserabilia’ is an unreasonably short title for a Los Campesinos! song. It’s also strange that the band with the longest song names in history are working from the most abbreviated set list in history. Perhaps they can’t remember what they’re songs are called either.

An energetic rendition of last year’s single ‘There are Listed Buildings’ is followed by the new single and title track of the new album, ‘Romance Is Boring’. Another corker of an album, although perhaps slower paced than their previous efforts. Tonight there is a very high ratio of material from that new album which is to be expected and perfectly understandable but for someone like me, seeing them for the first time after years of failing to get to one of their gigs is disappointing, as there are many notable omissions.

The perfect pop of ‘My Year In Lists’ doesn’t need any introduction, and the audience bounce off the walls of the Musician and scream along with every word. Whilst the rest of the band try to make their own voices heard over the crowds as they too attempt to sing Gareth’s lyrics back at him.

‘Can we please all just calm the f*** down’ shout the entire band. Ok ok. Oh hang on that’s just the opening line to ‘This Is A Flag. There Is No Wind.’

The biggest riot is saved for ‘You! Me! Dancing!’ which announces itself with the teasing foreplay of its long intro before all hell breaks loose, as the guitar riff finally gets going, leaps from the speakers and slaps you in the face.

It’s a hyperactive performance from start to finish, by both band and crowd, right up to when they close with another well received old favourite ‘Sweet Dreams, Sweet Cheeks’, delivered with just the right amount of indie tweeness. 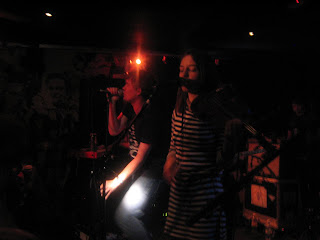 Their approach to encores is remiss to say the least and when they play one it tends to include some of the missing classics I alluded to earlier. No encore tonight though. Damn.
Posted by FitForNothing at 4:00 PM