I’m in the car today, running late and therefore in a hurry but also out of petrol. So thanks to the woman who parked her car midway between two petrol pumps during the busy morning rush, so that no one could use the pump she wasn’t using and also so that no one can get past either. Then she pretended not to notice and proceeded to do a week’s shopping in the kiosk whilst the petrol station became gridlocked and the queue snaked back onto the main road.

So I was in no mood later to be asked in Sainsbury’s (yet again) where the beans were. Why is it that people think, just because I have a shirt and tie on, that I work there? And why me? Three quarters of the men there are similarly attired as they’re all there on lunch break and anyway, Sainsbury’s employees DO NOT wear a shirt and tie, they wear a very obvious uniform!

Both dogs looked creased when I got home. Must be because the kids are on half term break from college and they must have kept them awake. This may or may not have involved the multiple chucking of rubber bones, plastic chicken drumsticks and balls.

All the same we still have training to do but everything is delayed by a horse taking up squatters rights in the arena. This delays everything by fifteen minutes and after MD’s session, which goes well, team training for Crufts (but not Doggo’s team) delays his training. So another late night out with the 'boys' with not a drop of alcohol in sight.

I get home and again try to catch some of the Winter Olympics. Again I miss the exciting stuff, the skiing and anyone hurtling down the bobsled/luge/skeleton track and get the curling instead. 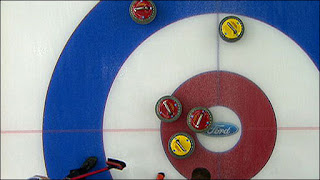