Apparently there were flurries of snow in centre of town this morning but I’ve seen nothing. Even L reports it snowing during her morning walk with the dogs.

L’s been looking at cycling undies in Evans Cycles. Cycling undies? Really? There are such things then but apparently there’s not much of a range. Not quite La Senza then. Although I’m not sure L's idea of cycling undies is quite the same as mine.

Finally we get a flurry of snow here. Then suddenly the flurry turns into a white out, albeit a brief one. I check my phone, no texts about dog training being off tonight, yet. They are a fickle bunch; surely it’s just a matter of time.

I receive an email from the Derby Triathlon Club entitled 'Dear Athlete'. Flattery will get them everywhere. The Derby Double Duathlon, which is three lots of running and two lots of cycling, is on again. This year they’ve even avoided a clash with the Derby 10k. It’s the week after, not that that helps much as I already have several options for ‘entertainment’ that weekend. Another weekend where I’ll be pulling events out of a hat.

The Save the Victoria Leisure Centre Campaign rumbles on as the council attempts to close the centre a year early, before it has even obtained planning permission for its replacement. A petition of 3464 signatures and 233 letters of objection have been submitted. There was also a demonstration last weekend that attracted hundreds of people.

One interesting fact about the ‘public consultation’ has emerged. Initially, the consultation on the future of the historic old building produced a majority in favour of refurbishment. That was until the council went into local schools and made presentations to the children. Once their views were counted, the results were reversed and there was suddenly a majority in favour of knocking the place down and building a new one. No doubt swayed by the option of a child-friendly fun pool? Nice maybe but a loss maker for the council. Kids now swim for free and the money the council gets from central Government doesn’t cover their costs. Perhaps they should listen to what the paying customers want but then they’d be in danger of turning a profit. 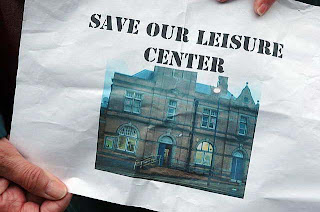 Shame about the Americanised spelling.

Dog training actually survives the two millimetre deep drifts we have here and I head off over there with the boys. MD’s weaves are excellent. Unfortunately he won’t be required to weave on his debut on Saturday. His jumping is ok; he even keeps most of the poles up. His tunnels though are rubbish. I mean how hard can a tunnel be for a dog? There’s very little you can do with a tunnel rather than go through it but MD doesn’t seem to quite get it yet. Unfortunately, I’m sure they’ll be plenty of those on Saturday.

After training I go around to my father’s again, he’s still having computer problems. Well that might be an understatement. It’s totally died. I take it away with me, to give it a decent burial.
Posted by FitForNothing at 4:00 PM