I’ve inflicted some tough training schedules on myself but playing an hour of squash and then getting up early the next morning to run to work must be one of the most punishing.

I don’t run home after work and I get the bus instead, which is packed. Well it wouldn’t be if everybody didn’t want a seat for their bags as well. So there are no seats free to sit on. What we need is an attractive young lass to get on the bus. Then suddenly half the ‘occupied’ seats would miraculously become available, as all the men move their belongings and seductively pat the seat next to them. Well perhaps not the second bit. It doesn’t work anyway, she’ll probably opt to perch on the end of the luggage area whilst you just end up with a twenty-one stone chap with a body odour problem sat next to you instead.

L does run home, opting to run six miles and promising to be several hours. She’s jesting of course. If she wasn’t I’d have beaten her home and I didn’t. In fact she’d even cooked. We eat then head off out and back to Derby.

We’re at a new venue for us tonight, the catchily named 'The Venue', a place owned and run, or so it seems, by the same people who revived the now once more defunct Rockhouse. Maybe they just decided that this was a better proposition than the Rockhouse and I think they’d be right. No idea what the place was before, it still looks like an old warehouse and it’s perfect for gigs, much more so than the Rockhouse. A better prospect to front up in battle against the also excellent Royal.

We’re here to see the Sunshine Underground, a band who seem to have disappeared, well underground, for the last few years. Their new album 'Nobody's Coming to Save You' can hardly be described as hot on the heels of their debut album, 'Raise the Alarm', which was one of the best albums of 2006. Yes guys, almost four years between albums, that’s bordering on Portishead territory but anyway welcome back. First though we have two support bands to enjoy.

I immediately like Birmingham’s ‘51 Breaks’, although on the surface there’s nothing inherently different about them. They’re just another indie band that’s following the fashion to plonk a keyboard stage centre. In their case a rather large specimen as well and one that lead singer Michael Turner barely touches. Most of their keyboard stuff seems to be pre-programmed anyway, so it’s a bit of a waste of stage space to be honest. All the same they’re still a decent outfit who put in an energetic half hour shift and play some dangerously catchy tunes. They even have a touch of Sunshine Underground about them, which endears them to most of the audience, so appropriately arranged support I guess. 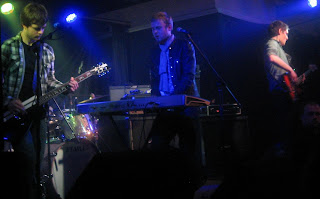 We wander off to get a drink from the bar which at £4.50 for two drinks was not bad at all. It’s that for one drink at most of the places we go to see gigs. I’m starting to like this place more and more. We return stage front and watch ‘Cosmo Jarvis’ take the stage.

I wasn’t sure if ‘Cosmo’ was going to be a band or a person and in fact he’s/they’re a bit of both. L immediately likes him/them, I’m not so sure. I’ve always been a little unnerved by people who name a band after themselves and he does appear to be a ‘band’. I’m equally mistrusting of anybody called something like ‘Cosmo’ but that’s just me being silly I’m sure. His album is also called, as you may have guessed already, ‘Cosmo Jarvis’.

Putting any ego issues aside he’s undoubtedly got talent. If you check out his website he’s also an actor and a film maker, who has made dozens of videos and short movies, as well as recording a stunning amount of music, which is all available there. No idea if they're any good, haven't got that much time to check. He appears a nice chap though, desperate to be liked, and clearly wants the crowd tonight to appreciate his talent but it’s not always that straightforward mate. A lot of his lyrics are very clever but unfortunately most of the crowd don’t notice and their attention span isn’t helped by the long and complicated instrument changes that disrupt the flow of his set.

His songs continue in that sort of vain, a track called ‘Crazy Screwed Up Lady’ sticks in my mind, if only because I knew her or was that her sister? Originally from New Jersey but having grown up in Devon, I’d describe him as a cross between Billy Bragg and good old Granddad Rob the Voluntary Butler with his home made mawkish I'm-a-loser-but-not-really songs. Then as a complete contrast he closes the set with a song about gay pirates... 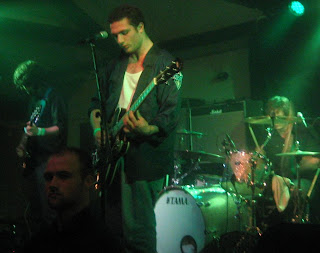 So from Cosmo, busy chap, he of a thousand songs, to the unbusy ones, those we haven’t seen for nigh on four years.

I do love a good rave, not. So The Sunshine Underground shouldn't really be my thing, nu-rave or whatever it was termed four years ago. The lads from Leeds though, always seemed better than the genre they ended up pigeon-holed with.

They open with last year’s 'Coming to Save You' single with not a keyboard in sight, although certainly more than a hint of a backing track, and set about disposing of that pigeon-hole. Their sound seems bolder and brasher than before but still predominately revolves around the strong voice of front man Craig Wellington and the crunching riffs of his and Stuart Jones' guitar. 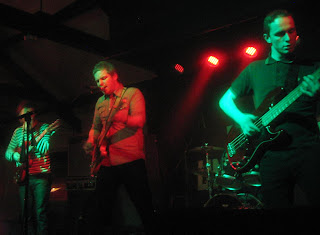 Gems from ‘Raise The Alarm’ are interspersed amongst the new stuff, a lively ’Wake Up’ and a predictably well received 'Commercial Breakdown' sandwich their forthcoming new single 'We've Always Been Your Friends'.

The new album is in many ways a continuation of the first but perhaps a little heavier and more expansive. As for the old stuff, that seems slightly reworked tonight, beefed up if you like, to fit in. Still though they are as anthemic as ever, and L and I are right down the front, dodging the fists punched towards the ceiling and just out of reach of the crowd surfer’s boots, as the diehards dance and jump around, singing along to every word, old or new.

Mid set, they slip in an obscure one, the b-side/album bonus track ‘You Never Party’, probably the raviest track they’ve done before a wonderful reworking of their finest moment, ‘Borders’ steals the night. 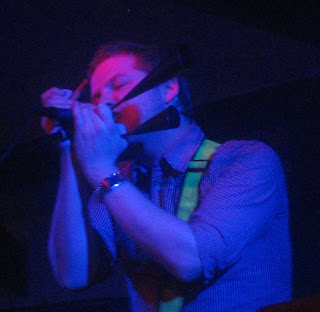 Of the new stuff, I prefer the slower numbers like ‘Any Minute Now’, simply ace tonight, an affecting song that builds to a soaring climax, but the best track is the penultimate one ‘Here It Comes’, a bouncy track, with a great intro that reminds me of Doves’ ‘There Goes The Fear’.

They are a band in a hurry tonight. Probably having cut too much slack with their supports they are now pushed for time. The original set list appears cut down from what they had been playing on this tour, although in the end they do add to it and helped by rolling the encore into the main set, they get in all but two of the tracks on the new album. 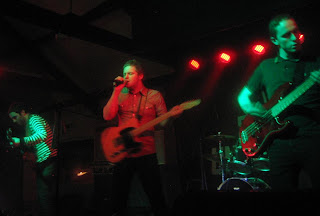 They close with a rushed and slightly messy ‘Put You In Your Place’ but I think it’s only me that notices. Then we tumble out into the cold night air to discover that we’ve missed our bus. Damn, now we have to stay on in Derby for a few extra beers and get the night bus home.
Posted by FitForNothing at 4:00 PM