I am awoken by seriously loud music coming from our kitchen at 4am. I get up to turn it down, carefully avoiding the broken glass on the way. There isn’t even anybody in the kitchen; it would have been too aurally painful to stand that close anyway, so I turn it off. On the way back to the bedroom I detour to the bathroom, only to find that something is missing... the door handle is no longer there. Half an hour later, L gets up to deal with some kerfuffle upstairs. She reports that there is a chunk of stair banister missing.

Morning arrives. Damage report. Assorted glassware and crockery, the stair banister, the bathroom door’s handle and the hall lightshade decoratively shredded across the floor. Plus the usual assortment of bottles and cans discarded everywhere. Teenagers appear to have no concept of ‘bin’ or even for that matter a surface to put things on and liberally use the floor instead. Same goes for the cigarettes outside, scattered around the periphery of the dustbin but none actually in it.

So in conclusion, no more parties. Happy Valentine’s Day.

Time for some fresh air on the park. MD, as well as becoming an agility star, has been working hard on kicking his various bad habits. Even L thinks he’s now over his car habit. Though it might take him a bit longer to kick the people habit, the other dogs’ habit, the squirrel habit, the cats’ habit...

In the afternoon I run with L, seven miles, along a very nice canal side, river side route. Very pleasant.

Then as its Sunday, it’s film night. Tonight a treat for all the ladies who lust after Colin Firth... ‘A Single Man’. The directorial debut of fashion designer Tom Ford and based on the novel by Christopher Isherwood.

Firth plays George Falconer, fifty-something English man working in Los Angeles as a college lecturer during 1962, the period of the Cuban missile crisis. A role for which Firth has got an Oscar nomination. George is also gay.... but relax ladies, there may be kissing but there are no tongues involved and no steamy sex scenes. 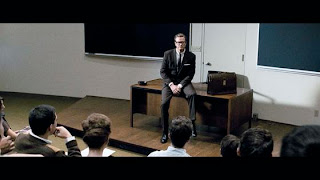 George is a man wracked with grief and is struggling to come to terms with the death of his long term partner Jim (Matthew Goode) in a car accident. George lives life as if in a trance, slightly detached from everything, going through the motions of life.

The whole film takes place over a single day, eight months after Jim’s death and is replete with flashbacks that as usual truly addle my mind. This day is the day he decides that he cannot carry on as he is. We see him putting his affairs in order. Meticulously arranging his insurance policies for people to find, leaving money for his housekeeper and buying bullets for his gun. Today, he decides, the bullets will end his pain.

Meanwhile he is stalked by one of his students, Kenny (Nicholas Holt), as well as being picked up by a young Spaniard, Carlos, who's keen to jump into his car and beyond. He arranges to spend the evening with his close friend, and fellow English exile, Charley (Julianne Moore), yet still he is not distracted from his intended task. 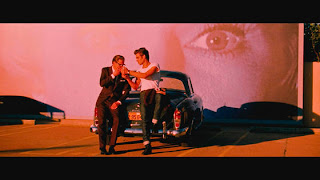 Unfortunately he just can't get comfortable enough to kill himself or in a way that won’t prove troublesome for his housekeeper. This introduces a moment of humour into the film which lightens the tone slightly but also seems slightly unfitting.

It’s an enthralling film but the one thing that stops you really getting drawn in is that unlike with George, who you do get to know, you never really get to know his dead partner, Jim. This means you never really quite feel his pain but then Charley has the same feeling and she did know him. When it comes down to it, Charley, who is divorced and equally alone in LA, is simply miffed that he will never be the red blooded heterosexual male that she thinks she needs. She fails to grasp the magnitude of his relationship with Jim and her assertion that his sixteen years with Jim wasn't real love but was ‘just a substitute for the real thing’ doesn’t go down well with George. This is sixties America, not a good time to be gay. George wasn’t even invited to Jim’s funeral and only got told of the accident as an afterthought. 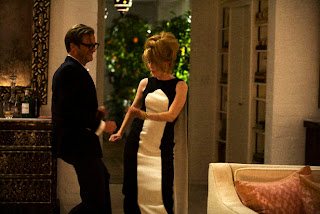 After a enjoyable but non-sexual evening with Kenny, George seems to decide that life might be worth continuing with after all. He puts away his gun and burns his letters of goodbye, only then to be struck down by a heart attack. Life’s a bitch.

A good film and one full of fine detail. Well crafted and well acted. They've obviously tried to make it Oscar worthy. Oooh I’m a cynic.
Posted by FitForNothing at 4:00 PM