Not In The Traditional Style

I wear the boys out on the park and then try and follow Derby’s away game at Sheffield United on the internet, via the text updates. I used to listen to it on the radio on Medium Wave but Radio Derby now use Medium Wave for Burton Albion’s games which I can receive in perfect clarity, should I be interested. Unfortunately our FM reception is very poor and they don’t yet have a DAB channel. I could pay for internet commentary but don’t see why I should, as I don’t really understand why BBC local radio should be banned from broadcasting its own commentary across the internet, as they currently are. It would be different if someone else was broadcasting it, but no one is.

Anyhow Derby nearly win but concede a late equaliser. Although I think we would have been happy with a draw before the game started.

In the evening we get the bus out to Keyworth and meet some friends for a curry at the Cinnamon Indian restaurant there. My friend rarely has a good word to say about any meal he’s eaten in any restaurant, anywhere. However he says he rates this place so L and I, along with two other friends of his, have flocked there to find out why.

It’s not obvious. My starter is good but my main, my favourite Jalfrezi, is one of most anaemic I’ve ever had. Even my friend who recommended the place isn’t impressed on this occasion and complains about the Tarka Daal. They promptly bring him another one which is in a different league altogether. I wonder whether someone nipped out to the neighbouring takeaway when we weren’t looking because it’s so different and so much better. It has taste. The owner explains that the one he’s has just brought us has been done in traditional style... it is what the chef would cook for himself and his family... I’m confused here, I thought we’d come out here to sample the chef’s cooking but instead he’s cooking in the style of someone else. Someone who thinks none of his customers have any taste buds. This doesn’t say much for the good folk of Keyworth. Apparently if we’d asked the chef to put taste into all our meals he would have done. Well NOW you tell us. So now we’ll probably have to go back to sample it all over again, traditional style, but tonight was a wasted meal really.

Even the naan bread wasn’t very good, thin and uninteresting and it certainly didn’t have the face of Christ on it like that university student claimed his did or perhaps I just hadn’t drunk enough bottles of Cobra. That student must have been well trollied. Supposed we've all been there, drunk and hallucinating. Seeing Kate Moss walk into the curry house naked just as you’re dipping your poppadom in the lime pickle. Seeing that fit young lass from your maths class decades ago sitting at the table opposite, she’d always been too aloof to speak to you, but she’s winking at you now. Seeing that lass with the Oboe from the Guillemots tucking into her Madras... personal favouritism creeping in there.

We check out a few local pubs, a fairly uninteresting estate pub that did as decent a pint of Bombardier as you’d get anywhere, it’s just that all pints of Bombardier are on the dull side, and a better more traditional pub that forced me to drink the dreaded banned brewery closing Greene King’s Abbot Ale because all the other options weren’t that exciting. Yes, I’m a traitor.

Back in Nottingham we pop into the Canalhouse’s Beer Festival to see what they have left. The answer to which is very little, they have been more or less drunk dry. So, as it’s a Castle Rock house, I have the old faithful Screech Owl instead. The Canalhouse is an interesting pub, well it's a Canalhouse you know. It has a couple of barges and a canal in the middle of it. 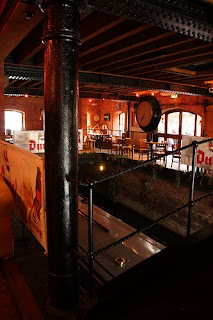