L has the day off and indulges in a lie in whilst I take the bus into work. It’s long run day again and I’m saving it for after work again.

I think perhaps L regrets the lie in as this disrupts the dog’s routine. They’re used to an early walk and then being left in peace for the rest of the day. A disrupted MD is more boisterous than an undisrupted one and that doesn’t bear thinking about. No squirrel or cat will be safe or anything else for that matter. I think she learnt her lesson; she won’t leave his walk this late again.

Can L’s day get any more stressful about taking MD out? Well yes. She makes herself a flask of tea and heads off cycling. Of course if she was really taking it really seriously she’d have remember the Battenberg and the Cherry Bakewells as well.

She’s taking it seriously enough to check out Fearne Cotton’s bike apparel. She’s in training for her Sport Relief ride, which is no Cheshire Cat... but it’s a good effort for a worthy cause. The relay team of seven are cycling from John O’Groats to Lands End in a bid to raise £1 million. The rest of the team are David Walliams, Davina McCall, Jimmy Carr, Miranda Hart, Patrick Kielty and Russell Howard. 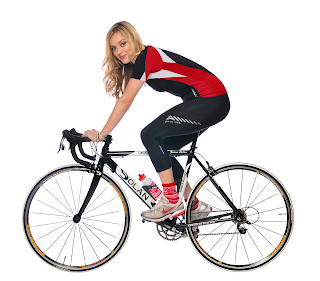 L is right, she does look quite stylish but then L has some nice cycling stuff too. The difference is that Fearne is only wearing one of everything, whereas L needs four cycling tops and three pairs of trousers just to keep her body temperature stable. L has one thing though that Fearne doesn’t and that’s cycling socks with elephants on them.

After work I do my run and despite a tight left calf manage to do twelve miles. The tight calf is quite worrying. It eases after about eight miles but I don’t really want to have to wait that long on race day. Perhaps doing more of a warm up might help.

I end up in Beeston, where I again meet L and the boys for sustenance at the Victoria.
Posted by FitForNothing at 4:00 PM