Yesterday’s ice gives way to an old favourite, rain. So I bike. As I meander through the estate I can see L and the boys up ahead of me. I can also hear them, well one of them, MD. He seems to be in good voice this morning.

I pull up at a red light in Spondon but the cyclist behind me simply carries on regardless, as do the two cars behind him. I know it’s a long standing tradition that at every set of traffic lights at least two cars jump the red light but the cyclist should have known better and all of us cyclists get the blame for that. He’ll stop one day though, when he meets those two cars coming the other way.

One of the events I’d fancied doing for a while was the Humber Duathlon in April but now I’m rapidly going off the idea. Mainly because there were only 27 entries in the last one, so I could end up doing the event and hardly seeing a soul for most of it. This defeats half the object of doing a ‘race’. This April’s event would be the third running of it. They had 41 entries for the first one but then it dropped to 27 for the second... so it’s getting less popular, either that or they lost the other 14 over the side of the Humber Bridge... I expect it's a bit blowy going over the bridge. Depending on where they land, that would make it a triathlon, technically speaking. 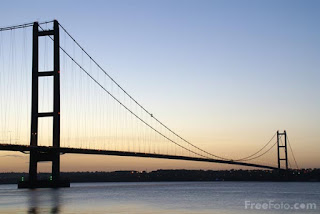 I was describing to L the other day my plan for avoiding a head on collision when a car overtakes another car and is coming towards you on your side of the road. This is when cycling. Basically it’s a case of getting ready to hurl one’s self sideways and home there’s a soft landing, like a hedge, there. I nearly got to put it into practice today on my way home. It was a close run thing.

My eventful journey continued a few miles down the road when I got a puncture going through Bramcote. I pull over and install a new tube, getting nice and cold doing so. I do the usual check for nails, shards of glass etc, which may be imbedded in the tyre. Nothing. I do notice that tyre is very thin though. Is that a hole? Hmmm, to be honest I have known that these tyres were on the way out, since... well, before Christmas. Half a mile down the road, whoosh, all the goes out of the tyre again. Another tube blown. It must be the tyre. I have another tube but I don’t wish to waste it, so I walk the remaining mile home.

All this means that I don’t get my swim again but still I get home at almost exactly the same time as if I’d been. Not the best day on the bike.
Posted by FitForNothing at 4:00 PM