As I check the news this morning I’m really surprised not to see a resignation at Derby County following a performance like yesterdays. I’m not saying I wish him to go but he really did look like he had given up and had no idea whatsoever on how to improve things out there.

The temperature is above freezing today and we have a thaw of sorts. So we both run, separately of course. I do 9.5km and it was quite a pleasant. The ground was actually very runnable, provided you aren’t required to try and stop quickly on the icy surface. Then when I get home, after a quick break, I go around the park again, this time hurling a couple of little yellow balls into the melting snow with two dogs in hot pursuit. Well more of an ambling lukewarm pursuit in Doggo’s case.

Then later on we hit the gym, so that I can do the bike ride that the weather doesn’t really permit. I do 15km at 90rpm which makes the legs burn a bit. In fact I have to walk on the treadmill to loosen up afterwards before crashing in the cafe to wait for L, who opts to lengthen her stay on the weights. Frankly I think I’ve done enough today.

Where once it was a little lad in a flat cap pushing his bike up the cobbled hill to deliver his Hovis now it’ll be no other than World and Olympic champ Victoria Pendleton, who has signed a deal with Hovis to recreate the famous advert from the 1970s. Now no messing around Victoria, we know you can get up that hill without getting off and pushing. 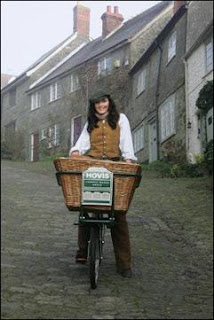 Then, as it’s my brother’s birthday, we head over to his place for a curry night but mainly to try and beat his seven-year-old on the wii. Much to the amazement of all of us, even my mother gets on the balance board and has a go at the downhill skiing. She even sneaks in ahead of the seven-year-old. Ha. Way to go Mum. My father loves it so much I can already see what’ll be top of his birthday list.
Posted by FitForNothing at 4:00 PM