Not Smiling Much Now

I’m only at work in the morning and in the afternoon we head up to the Lake District, after first collecting Daughter hot foot from her exam.

Unfortunately we aren’t going to get any snow up there, which is a pity and its forecast to be a warm 6 or 7 degrees all weekend. If anything they’re expecting rain. Our company snowman is so far surviving the warm spell but only just. He’s not smiling much now, well because he can’t, as his face has fallen off. 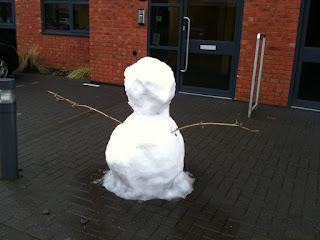 M6 was a doddle for once, which was probably just as well with no audio book to take my mind of it. I’ve just finished the last one that L got me, Owen Sheers’ ‘Resistance’. She got me it on the basis that it sounded wonderfully bleak. Its concerned the hypothetical situation that in 1944 the Germans repelled the D-Day landings and counter attacked with their own invasion. With the Americans, although in a war with Japan, refusing to get involved in a European war, Britain is effectively left to its fate. The German invasion is a success and they eventually take full occupation of Britain, with the country being governed by a collaborative government based in Harrogate. It’s an intriguing plot and it looked to me that L had made a good choice.

Unfortunately the book doesn’t elaborate much on what I’ve put above. It mentions the war situation only occasionally and when it does they are brief mentions. So it fails to slake my appetite for that side of the story. Instead the majority of the novel concerns life in a Welsh valley, in to which a small German patrol is despatched. In the valley they find just the women and their farm animals, their husbands having left the valley to become members of the Auxiliary Units, a resistance movement. The author tells us in the afterword that he heard from locals the story of these Auxiliary Units and how they were made ready for any potential invasion, which of course in reality thankfully never came. It sounds like fascinating stuff and makes it all the more mystifying why Sheers then let this and the entire occupation of Britain become such a minor part of this book.

Instead he focuses on the continuation of farming life in the valley as the German soldiers desert from their duty to spend the harsh winter there and assist on the farms, forging uneasy friendships with the locals. There is even a love story of sorts between the main characters from either side. The author shares with us his obvious love of the Welsh countryside and does so with plenty of rich language but it’s all very unsatisfying for an unromantic like me who’d rather hear about the war. Probably one of the most frustrating books I've ever read. 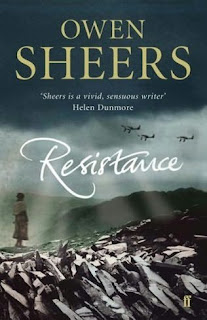 We’re in the pub early and our friends turn up a little later. Whilst being early for them, we had still managed to despatch three pints by then and now I’m ‘forced’ to have some more. They have a rather nice dark ale by the Loweswater Brewery’s called Grasmore Ale, a 4.3% mild, that wouldn’t really be able to be bettered had it not been that the celebrated Snecklifter was on as well and tasting particularly fantastic. This is despite the fact that with the Jennings Brewery still being a bit soggy after the floods in Cockermouth it is currently being brewed by their parent company Marstons. 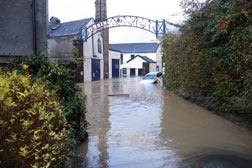 We stagger back to the cottage for some chilli to soak up our excesses.
Posted by FitForNothing at 4:00 PM