Apparently Some People Find It Useful

After a late morning session on the park I take on the role of computer engineer on call and head off down to prison with L. L has affectionately started calling her work prison, as she spends so much time there. I’ve offered to attempt to fix her new computer for her. Windows 7 is refusing to talk to her printer; whilst her old computer running XP is refusing to talk to the printer it has now been assigned. A definite driver issue. Now if only I can find what they’ve renamed and moved in Windows 7. Why do they always have to do that? Alter things that were fine before. Fixing her new machine proves infinitely easier than fixing her old one which is possibly the slowest machine I’ve ever met and I’ve met a few.

Whilst I’m there I show her how to get rid of that ‘ribbon’ thing in Office. Apparently some people find it useful... can’t imagine how.

Later we head down to Broadway for a film. Tonight’s choice, again one of L’s, is called ‘Precious’. It is based on a book called ‘Push’ by Sapphire.

It's 1987 in Harlem and we are introduced to a 16-year old black girl by the name of Claireece ‘Precious’ Jones (Gabourey Sidibe). She is seriously obese, illiterate and lacking a whole host of social skills. We are told this is because, in the sorry little apartment that she calls home, she is being monstrously mistreated. 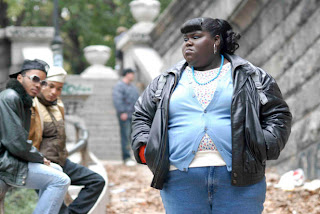 Her mother, Mary (Mo'Nique), is an unhinged and unstable woman, who is unemployed, probably unemployable, and subsists on welfare payments. She treats Precious as her own personal slave and thanks her for this by telling her how stupid and worthless she is. This doesn’t exactly do much for the girl’s self esteem, which is already on the floor. For them both, life consists of watching TV, eating crap food, the odd arguments, a spot of physical abuse dished out by the mother, the occasional visit from the welfare officer and oh, did I mention TV. During the brief visits from the welfare officer normality is attempted at and deceiving the welfare proves to be terribly easy. 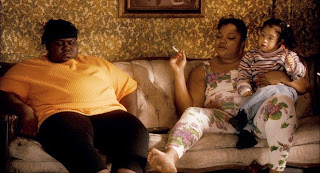 Precious’s only ‘escape’ is to fantasize about a better life but to her that seems to be simply becoming a pop star. She sees herself in this role, being the centre of attention, desired by gorgeous men and cheered by her adoring public as she walks the red carpet. Yes her utmost aspiration is to rise to the level of ‘I’m A Celebrity, Get Me Out Of Here’... but then don’t most people these days.

Oh and when she looks in the mirror, she’s no longer fat, or even black for that matter, but an attractive slim white blonde. I’m surprised there hasn’t been a complaint about that...

The story gets darker because it emerges that her mother’s boyfriend, Precious’s father, has been raping Precious since the age of three and seemingly her mother simply held his coat and trousers for him whilst he got on with it. This is despite the fact her boyfriend's sexual preference for her daughter makes her viciously jealous. Both of Precious and of the child that this union ends up producing. Then Precious finds herself expelled from high school when she falls pregnant by him for a second time.

In a way Precious attempts to fight back against her situation and despite resistance from her mother, who simply wants her to join her on the welfare, she moves to an alternative school called ‘Each One Teach One’ where dropouts go to get their GED (General Educational Development).

Her new teacher, the improbably named Blu Rain (Paula Patton), proves inspirational and Precious starts to read and write. Her classmates too, whilst far from perfect themselves; have enough empathy to become supportive friends. 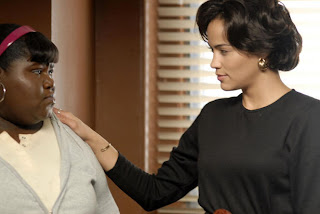 When she returns to the apartment with her second child, her mother intentionally drops him and then sets about Precious. Precious takes her baby and flees but falls down the stairs. She is followed down them by the TV that her deranged Mother hurls after her. It misses her, just. She never goes back.

A few days later at the halfway house where she is now staying, her mother turns up to pass on the cheery news that her boyfriend/Precious’s father/father of her children has died of AIDS. Precious finds out that she herself is HIV positive but her baby isn't.

She has one final showdown with her mother, in the office of her oddly familiar social worker Mrs Weiss. OMG, I though she looked familiar, it’s Mariah Carey. Where her mother attempts to explain her actions. As Mariah looks on in disgust, Precious leaves with her children and tells her mother that she will never see her again. 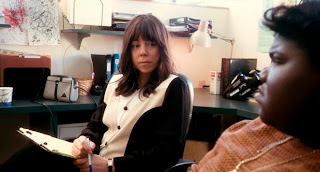 There's no happy ending. As her teacher points out, if she really wants to better herself, she'll have to put her kids up for adoption and that’s not going to happen. So probably Precious will simply end up being reabsorbed back into the welfare state.

It’s an ok film, bordering on good even. Depressing enough and it's very well performed. Mo'Nique's performance is particularly harrowing and there are other notable performances. Even from Mariah Carey, I knew she must be good at something, and Lenny Kravitz who pops up as a male nurse.

However it all smacks rather too much of it being the awards season. It plays the sympathy card rather too often and perhaps even attempts to make you feel responsible for Precious's life. It also packs as many social issues and stereotypes as it can think of into its two and a bit hours. Now let me see... physical abusive, sexual abuse, incest, teenage pregnancy, HIV, illiteracy, bad parenting, ethnic groups, welfare dependents... and it’s all played to shock but in the end social work and education save the day, maybe.
Posted by FitForNothing at 4:00 PM