Today, hurrah, my first bike ride into work for what seems like decades. Well it was last year, 17th December to be precise.

The roads are vile. Lots of grit and gravel all over them. I overtake a road sweeper which appears to be having a go at clearing up, which may be good news but maybe not if it drops cold again and they have to lay down more of the grit that he’s just got rid of.

It’s also time to get reunited with some old ‘friends’ and I don’t mean the cyclists I greet every day. I’m talking about the holes of yesteryear. Yep, Mr Pothole and his extended family are back and this time it’s personal... or perhaps not. I count six real corkers but they not exactly new, they were all there last year until they eventually got filled in. Now the freeze-thaw effect of the cold weather has brought them back to life from their summer hibernation. Councils up and down the country will be quick to complain about the cost of filling all these in but... perhaps if they’d made a better job of it last time around they wouldn’t have to go out and re-repair all the same potholes, all over again.

Thankfully I manage to dodge all the holes and also the lemming on a mobile phone whom walks straight out in front of me, crossing the road and looking in totally the wrong direction as he does so. I try to run over his foot but miss. Just.

My legs ache rather badly at the end of my ride, which just goes to show that you can’t just get straight back into these things. 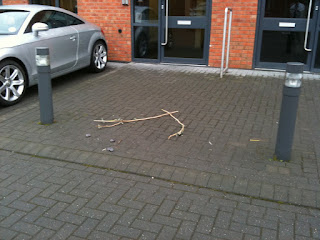 The ‘Death Of A Snowman’, sounds like an Arthur Miller.

L doesn’t email me to check I’m alive but then I did say that I didn’t want to hear from her if she’s in post-weekend away morose mode, which she always seems to be in after a break from work, no matter how short. She’ll be entering the lottery later this week to raise the necessary retirement funds; that is if she hasn’t already bought a ticket.

Later at the pool, something else I can’t recall having done for decades, I’m struggling with cramp. Whether it’s the shock to the system of the cycling or of the swimming I’m not certain. All the same, I’m just about managing to keep up with the chap who has joined me in lane one when a lane sixer, a rather large woman, joins us and puts the equivalent of a very large pot hole in the way of our progress. I have to resort to overtaking her. What I don’t release is that at the same moment that I have passed on her right and touched the side to turn, the chap, who had caught me up, had passed on her left and we all touched at about the same time. This experience seemed to freak her out and the two of them seemed to become involved in an argument. I didn’t stick around to find out the details and carried on swimming. Next thing I notice is an attendant is refereeing and having a word with her. This is unusual as the attendants normally don’t intervene in anything. Whatever he said, it seemed to work, as the woman was soon re-homed in lane four.
Posted by FitForNothing at 4:00 PM