The snow finally reaches Derby. Better late than never I suppose but there’s still not very much of it. There is just enough though to enable the first snowman of the year to appear outside work. 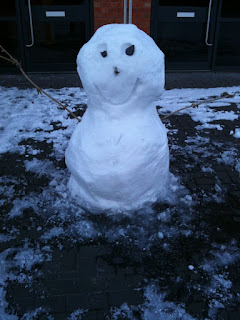 Due to the carnage being caused by the weather up here, not, I get a text at 9.30 to say that training tonight has been cancelled. As I’ve said, we’ve still not had very much of the white stuff compared with what the rest of the country has had and I had even got to work quicker than normal this morning because there was less traffic on the roads. Obviously a lot of people had either believed the hype and stayed at home or just simply took the opportunity for a skive and a day’s sledging. So the cancellation of training is just a little premature, particularly as the snow is due to stop around mid-morning.

Then an hour later I get another text to say that it’s all back on, although with a reduced session. I think perhaps they’ve had a lot of responses along the lines of ‘Snow? What snow?’. Even Nottingham City Transport appears to be running almost a full service and the kid’s old secondary school is open, when it’s usually one of the first to throw in the towel. Unless of course all those complaints I wrote last year have had an effect.

L keeps sending me events that clash with the Cheshire Cat cycle ride. She claims this is accidental and the Cheshire Cat, which she’s already entered in, had simply slipped her mind. Which it keeps doing.... I’m sure it is accidental but if I didn't know her better I'd think she was trying to get out of that particular event. Won’t happen though. I’ll keep reminding her and she knows she can rely on me to get her to the start line.

MD is simply excellent at training. For once he seemed to understand what he was supposed to be doing and does it well. It’s a tad cold though, if L was here she’d make him wear a coat. By the time I get the old man out of the car for his training I’m starting to lose the feeling in my feet. They feel a bit like they did when I dipped them in the stream at the Huncote Hash.

Thankfully L has a welcoming and warming curry ready for me when I finally get home.
Posted by FitForNothing at 4:00 PM