The lie-in the next day is probably longer than it should have been as we had intended to go out for a run but we can hear the rain pounding on the skylights of our room on the top floor and we are on holiday. Breakfast is being cooked for us by our friends who we have persuaded to come away with us solely for this purpose... and their excellent company of course. By the time we get out after breakfast, which should perhaps be known as lunch, its 2pm but a lot finer. We head out on a circuit of the Langdale valley, hampered only by a bit of drizzle and a lot of ice. Not many cars venture down the bottom end of the valley and consequently the roads down there have not been cleared. I have a Bambi moment or two on the ice. It doesn’t help that I’m tethered to the lively and unpredictable MD. The run turns out to be around 8.5 miles which is quite satisfying as we tumble into the Britannia Inn at Elterwater at 4pm.

Ok perhaps it’s a bit early to hit the pub, so I have a hot chocolate first but then get tempted on to the beer as our friends arrive after their less taxing afternoon shopping.

After a brief interlude back at the cottage, we take up where we left off back at the Wainwrights in Chapel Stile. I was a bit radical this year and booked a different cottage. Still in Chapel Stile but a lot nearer the centre of the village and therefore the pub. Not that this was the reason I picked it. Honestly. It was simply a better sized cottage for the five us and the two dogs. Still though the troops are not happy! Only one bathroom and no internet someone complains. 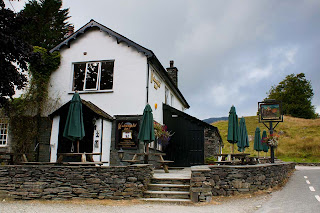 Again too much beer is consumed but what do you expect when both the Grasmore and the Snecklifter are sat there flashing a bit of leg from across the bar. The Grasmore comes from the Loweswater Brewery which was founded in 2003 at the Kirkstile Inn. A pub that has been West Cumbria's Pub of the Year several times but I don't think we've ever visited. This has been a major omission, that we must, at some point, rectify. The brewery has recently had to move out of the Kirkstile Inn in order to expand and last year purchased the Cumbria Legendary Ales Brewery and now brews out of their premises in Hawkshead.

Meanwhile Daughter instigates a session of ‘my fine is’, the latest quirk to hit Facebook. Thankfully I do not win; luckily my mate has always been more rebellious than me.
Posted by FitForNothing at 4:00 PM