I’ve already done one short run this week and I’m intending on doing a long one tomorrow. Today was supposed to be a gentle bus day ending up at the beer festival tonight but L said that if I was getting the bus, I might as well combine it with a run. So I did, despite the bed pulling this morning.

At least I've got someone to blame if it doesn't go well... but it does. In fact I’m feeling very in shape for this race next week. Which means that I’ll do a slow time, I bet. I always seem to run faster when I’m feeling unfit.

I spend my lunch hour trawling through the list of 810 beers from 280 breweries that will be available at the festival tonight. My cunning plan is to narrow this down to around ten for a bit of a ‘session’. No mean feat. First remove all the ones that aren't dark, as this is a preference of mine. Then remove all the ones I drink regularly or have tried before but don't rate. Then erase anything too weak and anything too far the other way. Then anything described as floral or citrus or smoky or flavoured with paradise seeds and curacao... The apricot beer gets the chop as well. This leaves me with a list of around 35. Still too many. The final cut brings it down to 15. Need a few reserves on the subs bench.

The 'good advice' is to not go straight for the strong beers, as you won’t remember the weaker ones you have later. There are two holes in this theory. One, why would you revert to weaker ones later? and two, the strategy of leaving off on the strong ones until later only works if everyone else does the same thing and believe me, they don't. So this is just 'advice' put out by Camra members who want you to leave the best stuff for them.

The best beers and particularly the strong ones will start running out well before the end of day one, Thursday. So my advice is don't mess around and although it’s not advisable to hit the festival on a ‘school night’, it’s the only way. 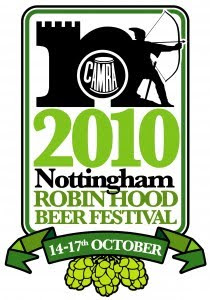 So it’s straight from work to the festival at the Nottingham Castle where I’ve arranged to meet L outside at 6.30 but I’m a touch early, so naturally I start without her. The rum and raisin porter is a disappointment, as deep down I kind of expected it would be. It had only just made my list but with that one out of the way early, things get better and better.

L is well sorted because they have a selection of her favourites:- Screech Owl, Jaipur, Fullers ESB, and even Marston’s Owd Roger. It was particularly good to see Owd Rog’ there, such a rarity on draught and damn good tonight.

The food was good too. Not only did I get a two course curry but a cheeseboard (well cheese platter) as well.

I have counted the number of alcohol units in that lot but I’m not telling. I'll tell you about the hangover tomorrow.
Posted by FitForNothing at 4:00 PM