I’ve been on stand-by for this year’s Survival Of The Fittest for what seems like forever. In theory L had talked her sister into joining her for a good hosing down by the local Fire Brigade but I was never actually sure that I wouldn’t be called upon as a replacement team mate until her sister actually turned up on our doorstep this morning. I suppose even then there was still a possibility she wouldn’t go through with it.

I wouldn’t have let L go through the ordeal on her own. I would even have run at her pace all the way around, on the condition that she piggy backed me across the river. I’m not going back into the Trent for anyone.

Her sister seemed to think that not being much of a runner would mean that she’d struggle with the 10k distance. Though it’s not actually 10k, it’s nearer 12. Sure there’s running involved but honestly that’s the least of her worries. The Trent, now that’s something to get worried about.

Hubby and the kids come to support, complete with bikes, so that they can cycle around the course with me. Which will be cool. Our own little peloton. L suggests she load me up with jelly babies and perhaps a bottle of Chardonnay with a straw. Nice idea but I ought not to drink wine whilst I’m cycling.

They are in wave 4 and at 10.45 they’re off. We wait at the first obstacle for them to come over the hay bales and wait... and wait. They are dead last over hay bales and it’s only fifty metres from the start. Cunning tactics I assume but they get appropriate abuse from the commentator for letting everyone else go ahead so they have the bales to themselves. I lead the fan club in trying to up that level of abuse. 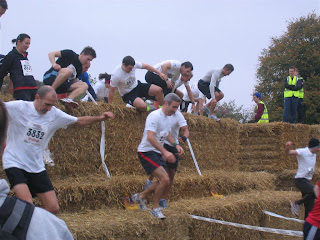 Then we set off in pursuit on our bikes, well we overtake them and get a good photographic spot for the mini assault course outside Nottingham Forest’s City Ground. Which seems a bit easier than when I did it last year. We weren’t allowed to put our feet on the ground between obstacles nor were we given a bunk up over that wall nor were we allowed to skip the monkey bars. What happened to equality?

Then I lead the peloton round to Holme Pierrepont and the really ‘fun’ bit. The mud crawl is well received... and there does seem to be more rocks in it than last year, which is one improvement at least. Sis crawls out of the mud and asks the photographer how her hair looks. ‘Great’ he lies, but her her hair will be fine, it’s about to get a rinse, in the Trent. Anyway, she’ll have more serious things to worry about soon, like not drowning.

First though there's more monkey bars and... I can’t believe they’re skipping them again. Then it's the river traverse and then the water slide back in to that cold cold water and a chance to wash all that mud out your hair.

There's assorted inflatables, tunnels, a clamber across the skate park and a chance to shoot some netballs until eventually it’s the last obstacle, the wall of fame. L has been worried all week that there won’t be anyone behind them to heave them over that wall. True she won’t be getting any help from the bunch of Santas who were spotted heading off in the other direction, destined to dip their suits in the river. No matter, there are still plenty of guys around who are willing to push a girl over the wall by her bottom. 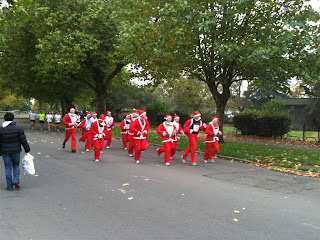 They do well. A respectable time and they’re not even last, quite a long way from last actually. Generally though I just think they’re relieved to be alive.

After a pub lunch and a chance to embellish those survival stories, we head home and then later up to Sheffield. It’s October, so it must be about time for another Delays gig.

We miss the tackily named ‘Scars on 45’ but catch the unusually named Ruberlaris from nearby Chesterfield, who seem to have a bit of a ska/reggae thing going on. Well, at least the lead singer/guitarist Chris Alsop does. Sometimes I think the rest of the four-piece band, who apparently are usually a five-piece with a saxophonist added, are playing something more conventional but it all blends together quite well. Lyrically he is strong too.

The band struggle at first to get much reaction, other than warm applause from the small crowd, because it’s still quite early in the evening but the crowd gradually warm to their high tempo music and energetic stage presence. They’re pleasant enough but really not my thing.

After a short delay (that’s nearly a pun), Greg Gilbert bounces onto the stage in typical Greg Gilbert fashion, wearing what I’m almost sure is the same shirt he always wears when we see the band live. I just hope he washes it occasionally.

‘Girls On Fire’. It's back. The Bodega in June was good but this is already better, they didn’t play it then. Well its better until I start getting picked on. That's all I need the lead singer having a go at me for not clapping to ‘Lost In A Melody’. It’s not even one of my favourites. Then he seems to keep his beady eye on me all night which, I think, makes L a touch jealous. 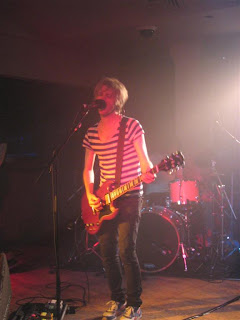 Greg introduces ‘One Night Away’ as just a song from ‘Faded Seaside Glamour’, their first album. I don’t recall them playing it before but I’m sure they must have, just not recently. I always like it when bands chuck in an obscure oldie. The song ends with a touch of feedback and morphs into the excellent ‘Friends Are False’.

Four tracks in and nothing new yet, nothing from their new album ‘Star Tiger, Star Ariel’. Then ‘Find a Home’ appears but the only track we’ve not heard before is ‘May '45’ which appears mid-set. That apart there’s a lack of new stuff. 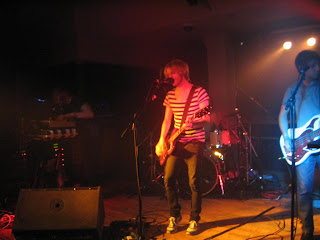 A chap in the crowd keeps yelling for his favourite song but he doesn’t actually know the name of the song he keeps yelling for. Aaron fights him off once but then Greg has a go when he requests ‘In Bittersweet Sunshine’ for the third time. ‘How can I play that when I aint f***ing written it yet?’ he protests before launching into ‘In Brilliant Sunshine’.

Tonight I think it's possibly the liveliest Delays crowd I've seen, the place had filled up considerably, adding to the small crowd who witnessed Ruberlaris. The band are as lively as ever, well Greg is, he even bounces his shoe laces undone during ‘Wanderlust’.

‘Panic Attacks’ is accompanied by an order to ‘get your arms up Sheffield’ and I’m sure he’s looking at me again. He hasn’t got much time to hassle me though; they seem to be in a rush now, up against another Saturday curfew. To coin a phrase or an album title, ‘Everything’s A Rush’. (Mental note: in future pick midweek gigs for longer sets).

‘Hideaway’, ‘Nearer Than Heaven’ and ‘Valentine’ end the set with the crowd continuing the latter even after the band have left the stage.

They return and Aaron protests about the curfew, ‘they’re trying to kick us out’. Yes but you were late coming on mate. They still run slightly over budget with ‘You And Me’ and ‘The Earth Gave Me You’ appropriately from the aforementioned ‘Everything’s A Rush’.

I’ll let my partner sum it all up. ‘Such nice boys’, so says L. So there you have it.