My ears are still ringing from last night. I hope nobody wants to speak to me today.

They wouldn’t be able to anyway, I’m plugged into the Commonwealth Games which streams nicely on my phone.

I see Price Charles got introduced to the Australia hockey team. I can understand why he wanted to meet them but I'm not so sure why they're dressed as they are. Chas doesn't seem to mind though. 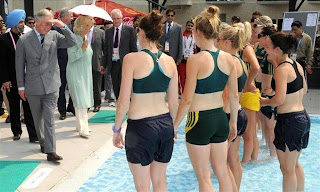 Naturally I’m glued to the cycling and to the squash, from which I’m trying to pick up a few tips.

I’ve been having to watching it all on their internet channels because the main BBC TV channels are showing wall to wall swimming. Yawn.

I’m not sure I’ve learned much from the squash. I was hoping that I would turn up for my game tomorrow night a new improved player, but I doubt that’ll happen. It’ll just be the old one with some grand ideas that won’t come off.

Perhaps I would have learnt more from watching the men’s quarter-final rather than the women’s one but I do like those skirts. Anyhow, I best do some work.

At dog training later even Doggo gets a go and he’s more vocal about it than MD. Another bad habit the little one has passed down or should that be up?