I run the last four miles to work again. I’m not sure whether to do a short run on the way home as well or just rest up until the weekend now.

I do so listening to Pat Barker’s ‘Border Crossing. 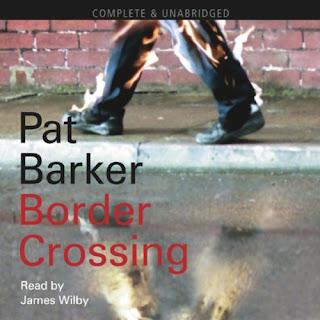 L and I are reading the same audiobook at the moment, with slightly different takes on it. It will make a lively discussion over a few beers when we've both finished it. Which in her case will be quite soon. She's more adept at this reading lark than me and has, after giving me a head start, caught me and now we're I think we’re about neck and neck but I know she's just slipstreaming me and is about to rocket past. This is one thing I won't beat her to the finish line on. If she was a cyclist on the morning commute, she'd be deadly and not popular with tactics like that.

I decide that I will do another run tonight and the weather turns out nice for it. No, not really. It’s mainly horizontal, the rain that is. Thankfully it stops for 5pm and I run to Chaddesden, from where I’ll get a bus to nearer home and then run from there. Then it starts hailing, sideways. Three of us take refuge in the bus shelter. Which is cosy. All lads unfortunately.

L's at the gym, probably sheltering from the rain and she says she's not coming home until she’s finished the book. Told you. I’m going to get comprehensively beaten in to second place on this one.

Thankfully the rain/hail blows itself out whilst I’m on the bus and I run the last four miles to home, only getting wet on the very last stretch, half a mile or so. As I wind my way through our local streets, I cross the road and nearly get mown down by a cyclist. No lights! He swears at me. Perhaps he has a point. Perhaps I should have seen him. Then 50 metres down the road he almost drives into the side of a car which had just pulled out of a side street and obviously hadn’t seen him. Perhaps he hasn’t got a point. Perhaps he should get some lights.