I’ve spent the last four days camping on the edge of the Bowland Forest, just outside Lancaster. We even nipped in to Morecambe to see Eric. 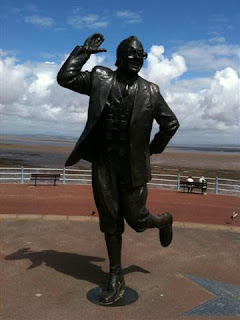 We spent the days chilling out, trying to find a decent beach for the dogs, and eating full English Breakfasts. Well apart from one thing...

We manage to pop up on Saturday night to register but any hope of a quick reconnaissance mission is dashed because there are no signs yet that an event is due to take place at all. We have to double check it’s still on.

The next morning though, transition springs up out of nowhere on Cockshott Point near Bowness on Windermere. Then before we know it, a very nervous looking L, clad in wetsuit, is wading out with the other mad folk into Lake Windermere. 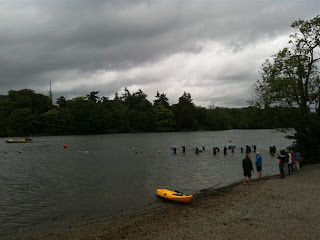 The 1,500m swim takes them out around somewhere called Crow Holme Island and back. The water looks very choppy... glad I’m on dry land. The water though was virtually tropical, apparently, ‘just like a bath’. I’ll take their word for it.

L looks stressed but I’m very laid back about the whole thing, just looking forward to a nice blast around the Lake District on my bike. My only requirement really is that L doesn’t take her time too much and dump me in last place. Other than that I’m looking forward to chasing a few people down. As it turns out there are 94 starters and amongst some seriously good company she comes in around seven from the back. I’ll take that.

All the time we were up in the area the weather was glorious, shorts weather and I have the sunburn to prove it. The exception was on race day and more specifically when I started the bike leg. Suddenly it turned into your typical wet and windy Cumbrian fare. It also meant I got my posh bike wet. Grrrr.

I know most of the roads that the 43km ride is on and knew I’d enjoy it before I even started, despite the on-off rain. I wasn’t expecting too many hills, it is the Lake District but the course was on some of the flattest roads you’ll find around these parts. So a bit of a drag up a hill out of Bowness was a bit of a surprise but it soon settled down to just undulating.

I was hoping to average 29kpm, so the ride would take me just under an hour and a half. I also had the aim in my head of overtaking around twelve other competitors and I get the first one on the way out of transition, I overtake him running with my bike out to the mount point.

I pass my next victim in the centre of Bowness, less than a km in. Easy this. Ten to go.

The route basically follows the outline of the lake, through Ambleside, then Hawkshead, where the only really big hill on the course is. Then it’s down to Newby Bridge before turning back up for home.

I don’t pass many for quite a few miles but then I come across a glut of cyclists and gradually tick them off my list. Twelve victims are soon counted out and in the end I reckon the body count comes in at 19, that’s discounting several others who I think were maybe just out for a pleasant morning cycle and weren’t in the race. Sometimes it was hard to tell. The presence of a race number wasn’t always obvious, as many had put on jackets to keep out the rain.

I find out later that I did the 23rd best ride of the day. So thrilled with that. Though a lot of the folk I beat obviously were a bit tired from their swim... but so what.

The weather saved its worst for the 10km run, which was L’s job. I could have done this of course but was glad I didn’t. A four lap course in the pouring rain. Yuk. It was bad enough sheltering under the trees with the fan club (the dogs).

In the end we finished 63rd overall. Which that ain’t bad. So that’s my first Olympic distance triathlon done, well a third of it. I wonder if my team mate will fancy doing any more.

Back to today and back to reality, work etc. Though I liven things up by taking the dogs for an early morning run. Something I’ve not done for a while. It was an experience, a bit fraught but we got through it. Loose cannon at the front, shooting (his mouth off) on sight. Whilst Doggo was stationed as rear gunner, methodically taking care of things at the back, all the bushes that needed watering etc etc. Sometimes he was lagging so far behind I’d forgot he was with us. Then there’s me, trying to keep order in the middle.

Then dog training later which causes me to miss Germany’s exit from the World Cup. So a Holland v Spain final, a new name on the trophy.
Posted by FitForNothing at 4:00 PM