At today’s dog show MD again impresses me with his enthusiasm and running. He has a pole down in his first course and then struggles with the weaves in his next two. Mainly my fault for being a bit too ambitious with his weaving when I could have encouraged him to go slower and given him a straighter angle. We retire to the practice ring for a refresher on those weaves. Just one pole all day though is cause for optimism.

Before Doggo’s first run of the day, I sit scoring on the course he is going to be running. This is a good chance to see how everybody else is tackling it. Badly as it happens. I sit watching everyone get eliminated. It’s a tricky course but there’s a real chance we can get something here, though the course time limit is very tight and we may get time faults if he doesn’t get a shift on.

When we run, it’s clear but very scrappy. We could have been a second or two quicker I reckon. It’s particularly annoying as we are a mere tenth of a second outside the course time. Even so it’s good enough for sixth. Problem is the rosettes stopped at fifth.

In fact the old man gets three clears out of three today. Though again on another course, with the same judge, we are again just outside the course time, this time by seven tenths.

We could home empty handed but in positive mood for tomorrow.

The Tour de France is winding up for its finale and today it’s the penultimate stage, the individual time trial. Andy Schleck, unfancied in the time trial, does a decent ride but still goes down by 31 seconds to Alberto Contador. Who is now set to win his third Tour by a total margin of 39 seconds... which by some amazing coincidence is exactly the same time he gained on Schleck, when Schleck’s chain came off on the mountain stage last week.

Later, we head over to Derby to check out the Greyhound on Friar Gate. The Greyhound has been shut for four years but reopened in May after being refurbished by father and son team Trevor and Paul Harris of the Derby Brewing Company. 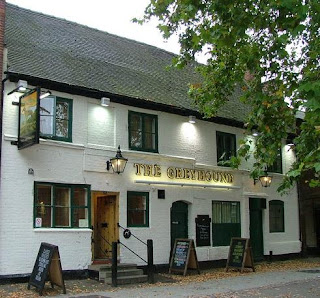 The pub dates back to 1734 and was part of the notorious ‘Derby Mile’ pub crawl, if you’re into that sort of thing. The mile was once quite an undertaking but several pubs have closed along it in the last few years, so it’s not the challenge it once was.

Unfortunately my first impressions are disappointing and that the place is not a patch on the Brewery Tap, The Royal Standard on Derwent Street. It seems much more modern and trendy. It doesn’t have the back to basics approach of the Royal Standard. Perhaps it’s just because it’s too busy tonight, which I guess is good news for them. Even the beer garden and roof terrace are full, there’s just nowhere to get comfy. We will try and revisit on a quieter night.

It’s odd how pubs like the Greyhound have shut through lack of trade but then once someone who knows what they're doing opens them again, they thrive. Before we got to the Greyhound, we passed bar after bar, practically all of which we were sparsely populated. In fact all of Derby looked pretty quiet tonight, apart from the Greyhound. 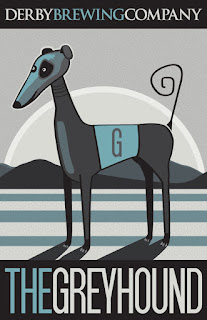 We move on to the Silk Mill via the Flowerpot but it’s not a good ale night anywhere tonight.