I do an extra five miles cycling this morning. Is this part of some grand training plan you ask. No. I forgot my phone. Not that this, in itself, was problem but I was not sure where I’d left it. Knowing me, probably in the front garden and I can't ring L to ask her to check... So when I realised, I turned round and went back for it. I found it on the stairs, where it could have been crushed under a teenage foot or chewed by a dog. So perhaps a good call to go back for it. Then I have to go into race mode to make up lost time.

Waiting for me at work is a 'Darling...' email from L. Seems her running partner for the dreaded water fest that is Survival Of The Fittest, her sister, has backed out. So she needs a substitute team mate. Hmmm. I have no problem with the running bit, it's the enforced drowning in the River Trent bit that I wasn't keen on last year. Oh well. Duty calls I guess. It better be one hell of a curry afterwards.

Shame she can’t ask her latest fella. She can’t because it’s another fictional character. Edmund Dante, the Count of Monte Cristo. Apparently such is the crush; our next pup could be called Dante. I suppose Dante is a step up, of sorts, because up until last week it was going to be called Mika. By the way, I see Liverpool have drawn an Albanian team called Mika in the UEFA cup. It’s such a common name.

Apparently as I cycle home I miss L, who is walking through Borrowash, where she’s off to meet some friends for a run. Not my fault. I was momentarily distracted by something pink with a ponytail pedalling rather sexily in the other direction. It was not my usual blonde and of course I needed to check out her bike. I’ll make it up to L later.

No training tonight, gardening instead! Then footballs on park before settling down to watch the controversy in the Tour de France.

Andy Schleck’s chain comes off, close to the summit of the Pyrenean climb of the Port de Balès, and jams in his rear wheel. Happens to us all. Alberto Contador took full advantage, powered past him, shot down the descent on the other side and consequently turned the 31 second deficit he had to Schleck into an 8 second lead. Contador was then roundly booed by the crowd as he received the yellow jersey on the podium. Why? Because profiting from another’s misfortune like that goes against race etiquette. Well... sometimes, it depends who the bad guy is. 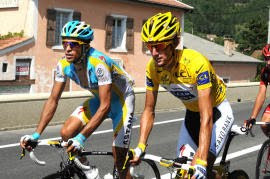 Contador kind of apologised later saying "maybe I made a mistake". Is he really sorry? Will he give Schleck the seconds back tomorrow, we will see, but somehow I doubt it.

Talking of saying sorry, just when we're thinking someone must have strung up the race director of the Crich 10k, the results and an apology arrive by email.
Posted by FitForNothing at 4:00 PM