If It’s Not One Thing It’s The Other

With his weaves refreshed, MD has no problem with those today but gets a least one pole on every course. If it’s not one thing it’s the other.

Doggo also catches the weave bug. Bug as in the negative sense and refuses to do any more than 10 of the 12 on his first course. Exasperating. We do better on his only other run of the day and go clear but disappointing come nowhere.

L does her timed run, as specified on her training plan, but seems disappointed to be around 15 seconds outside her target time. I don’t think that’s bad, it’s early days. Good that she's disappointed though... and I'll expect an improvement next week...

As expected Alberto Contador seals his third Tour de France title in four years and it’s great to see a reinvigorated Mark Cavendish win the final stage on the Champs Elysees for the second successive year, the first man ever to do this back-to-back. It’s his fifth win of the race, which after a bad start didn’t look likely. Now if only he hadn’t thrown his toys out the pram when things weren’t going so well he would have amassed enough good placings to win the Points Competition. 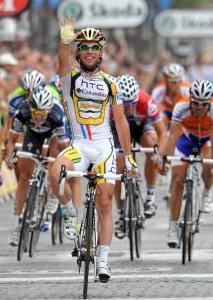