Supporting Is So Much More Fun

I run into work, taking it nice and gentle. This is just a loosener for the Crich race tomorrow. L though is running tonight, as well as tomorrow. Two races in two days holds no fear for her.

Her preparation doesn’t start well when she finds the leisure centre shut so that she can’t do her morning gym session. She arrived to find all the staff sat on the wall outside while two workmen were frantically trying to unjam the shutters. Perhaps somebody had heard that we might not be getting out £50 ‘Change For Life’ bribe now that the government have axed the scheme and decided to get their retaliation in first.

Tonight’s race, the Tara Kinder 10k, just isn’t really me. L says it’s rather nice, it has a t-shirt and a cake stall, ‘what more could a boy want?’ Answer - excitement, danger and something that isn’t three and a half laps of a grit track around the outskirts of Elvaston Castle or perhaps I’m just being picky.

She’s mainly here for the fitness or it could be the t-shirt. Seems my girl will do almost anything for a t-shirt... and I thought it was chocolate that girls were supposed to do anything for? Well there’s always the cake stall.

After work I walk/jog the three or so miles to Elvaston Castle, sheltering in the trees every time a rain shower comes. My decision not to run starting to look more and more sensible.

L texts to say she’s enjoying the bus ride over, which means she enjoying reading her new book ‘The Count of Monte Cristo’, and is looking forward to copious amounts of alcohol. I think she’s forgetting about the bit in the middle. I mean, isn’t there a run in there somewhere?

As I tuck into the cake stall and grab a coffee from a van, I wonder why I bother competing in any of these events at all when supporting is so much more fun. 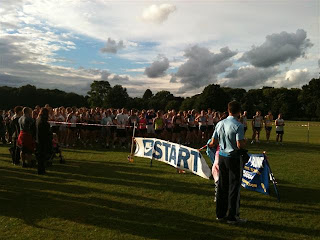 After the race we walk back to Borrowash and then catch the bus over to Beeston. Our aim is to check out the Crown, which is now under new ownership, having been sold to Everards by Greene King. It’s been open for a while now but we’ve not had chance to visit. It is now billed as a Beer Emporium with 14 real ales and was recently ‘crowned’ (if you excuse the pun) Nottingham’s pub of the year, beating local rival and many times winner The Victoria into third place. Another of our haunts, the Hand and Heart, came second.

It’s quite impressive and very very busy. This is certainly a business model that works. They are also happy to have dogs in the pub, so it could be a regular of ours if only we could find room somewhere in the pub to sit with them. 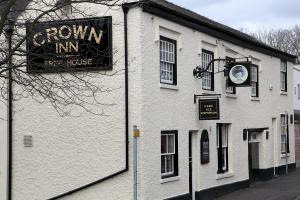